I finally made it here.
My wife dropped me off at LHR T3 and I went through the usual formalities. BA 207 was due to take off at 9:40am but although everyone else got to the airport on time somehow the captain didn't. I guess you do need him on board, however there always seems to be something going wrong with BA flights these days. I cannot remember the last time I left at the scheduled time. We eventually took off and they tried to catch up time but we landed nine and a half hours later in Miami about 45 mins late. I took a picture of the aircraft. 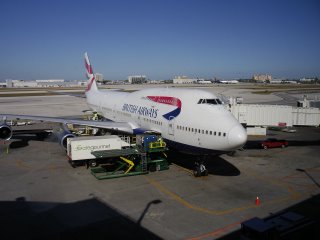 I was one of the last off the aircraft and everyone had a long walk to immigration and then a long wait to get seen. My paperwork was all in order so then I could reclaim my baggage. That went smoothly and then I looked for the National car rental desk. It had a sign on it saying catch the bus. I dragged my 64 Kgs of luggage to the bus terminal and got on the bus that then picked up loads of others before driving right out of the airport to the car rental premises. Luckily I was near the front of the queue for car hire and I picked up my Chevrolet something or other. 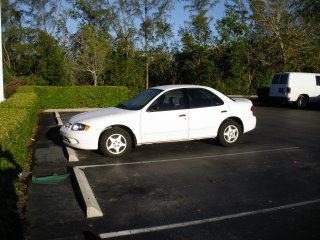 I got under way but without going into detail the journey was tough. I was given a card with a 4 line description of how to get to Naples. I got lost in Miami and really struggled to get back onto the right route. I stopped at a petrol station and nobody spoke English or could show me where I was on a map. When I did get going properly the traffic was bad and slow. 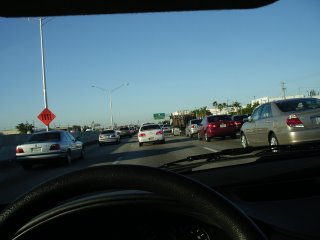 Eventually I got onto Route 75 (alligator alley) and went through the toll $2.50 (not $1.50 as per my instructions). It was getting dark and so I was travelling faster than perhaps I should have been. After covering 75 miles from the toll booth it was dark and the sign posts are v. poor. I missed my turn and then spent an extra hour trying to find a route back to my destination. I did make it in the end. A journey that should have taken 2 hours took more than 4. I was feeling depressed about my navigation abilities and hoped this would not be the case in the air. The Wellesley Inn was much better than I expected and my room is big and well equipped with microwave oven, fridge, shower/bath, coffee making facilities, iron, hairdryer, wi-fi, tv, safety deposit box big enough for my super portable pc, etc.
Here is the hotel. 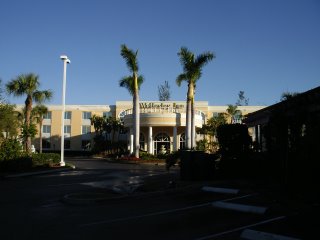 I slept badly after my 20 hour day but Tuesday was a good day and I will cover this in my next post.