I've been having a great time in Florida and it’s my day off although the forecast is for stormy weather with possibility of thunder. At sunrise I looked out of the window and was greeted by a clear blue sky. I thought I must get moving and make the most of it. The idea was to go to the Third Street South shopping area and get breakfast. I cycled down there but it was only 8:30 and I thought it would not be open yet so I went to the beach because I knew the pier was nearby. 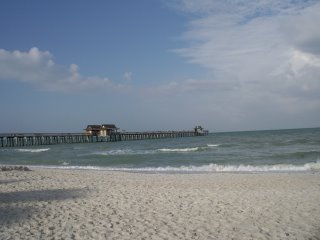 The beach and pier. 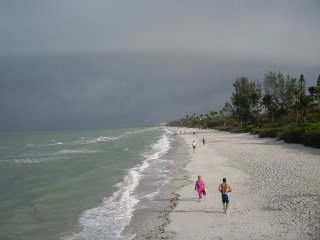 On the pier but I know bad weather is approaching fast 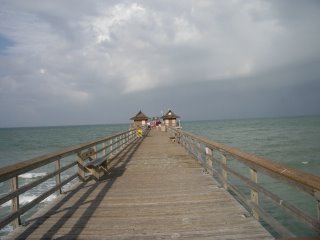 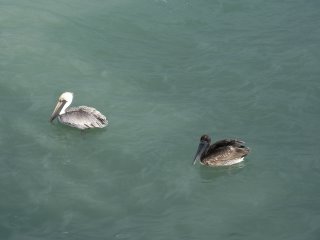 Pelicans hanging around near a fisherman 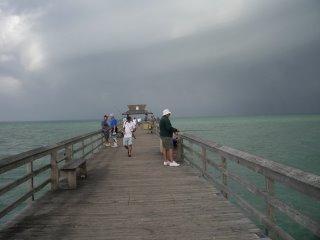 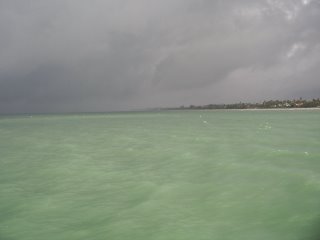 Good thing I did not go to the North of Naples 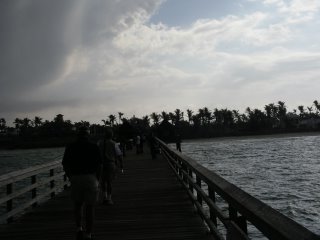 Time to join those heading for shelter
I didn’t make it in time even though I was quickly pulling my lightweight hiking waterproof from my rucksack I got a soaking. The waterproof was at the bottom of the rucksack and I was trying to avoid emptying the other contents all over the pier and into the Gulf. I managed to retain ownership of everything but it was a bit pointless putting my waterproof on now as I was drenched. I took shelter with others at the shore end of the pier. Once the rain had stopped I put on the waterproof to stop the spray from the tyres running up my t-shirt and shorts and cycled up to the shopping area. I arrived and there was no-one to be seen. 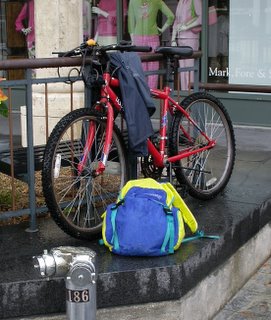 First time I had worn my waterproof. 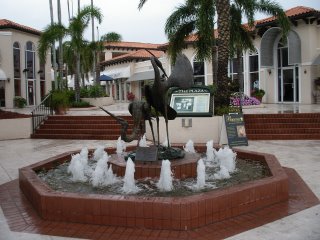 I had the Plaza to myself.
Having walked all around the Plaza and determined that no cafes were open, I cycled to a nearby street and could see some encouraging activity. There was a grill with a balcony where you could buy coffee and muffins in the next-door shop and then sit on the balcony. I locked up the bike and got a croissant and a coffee and then sat on the balcony under cover from the now light showers. 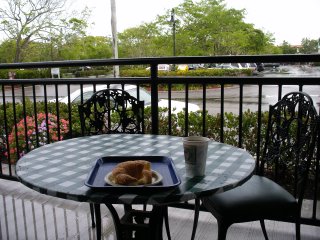 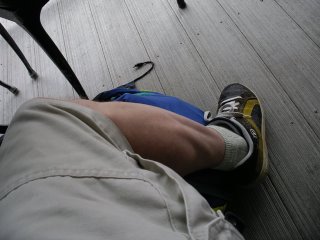 After 3 weeks of cycling I was even showing signs of muscles in my legs. Sorry, it is not a pretty sight.
After my enjoyable breakfast I cycled off and stumbled upon some closed roads where the Naples Art Festival was taking place. I paid my three dollar entry fee and went in. 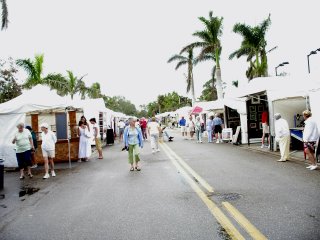 There were loads of exhibitors 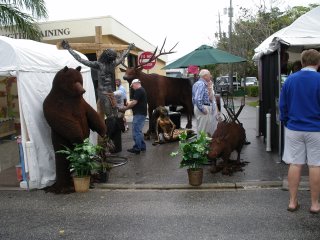 Lots of different types of art 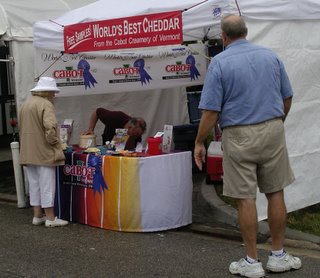 I don’t think the guys back in Cheddar, Somerset would agree that the best Cheddar in the world comes from Vermont. Unless there is a Vermont in Somerset. 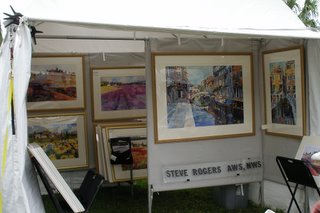 I am learning watercolour myself and this is the kind of style and standard that I aspire to. 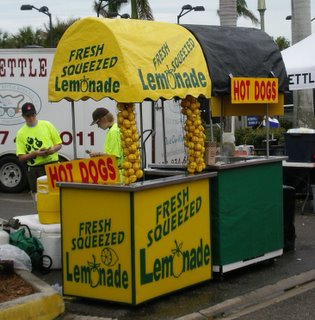 There are refreshments available
After having a really good look around it was time to cycle back. 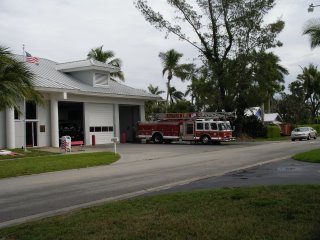 So this is where those fire tenders live. (they came to the hotel on two successive nights) 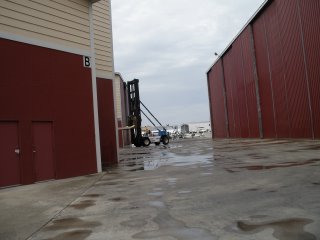 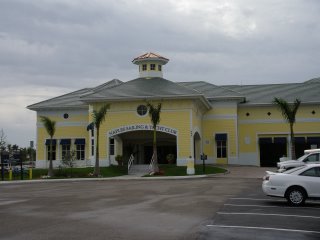 The Naples Yacht Club, members only so clear off Peewit.
I returned to the hotel and after half an hour the weather seemed to be improving so I thought about having some lunch at the Waterfront Café. On my way out I tried to ring my daughter Caroline using my calling card and the payphone. The card was low on credit so I tried the topping up procedure. I eventually discovered that you had to have a US issued credit card to do this. I asked at reception for somewhere I could buy a new card and they said the Mobil station on 41. I was back on my bike cycling into a headwind and after 15 minutes hard cycling I purchased my ten dollar card (enough for 3.5 hours of transatlantic call time). I used the payphone on the petrol forecourt and rang my daughter in The Midlands. She answered but could not hear me. I had been trying to call her for an hour now and still had not achieved it. I had my mobile phone with me so at great expense I rang on that. Guess what – same result, I could hear her but not vice versa. Must be a problem on her phone. I cycled back looking for The Waterfront but it must have closed or have a new name so I went to Pier 41 instead. I got a cool beer and ordered a lobster stack salad. While waiting for my salad I tried my mobile again and this time I got through. We had a quick chat and my salad arrived. It had mozarella slices, on tomato slices on lobster mayonnaise layers, all on a bed of salad. It was excellent. After lunch I wandered along the boardwalk around Tin City. 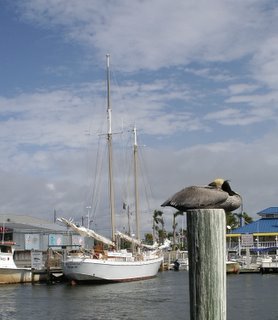 A Pelican on a pole and a sailboat
I wanted to go and check the Greyhound times for my trip from Naples to Miami on Friday so set off on my trusty bike. 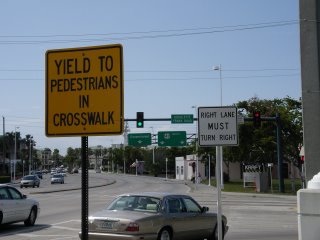 DO NOT TRUST THE YELLOW SIGN – assume they will run you over.
Back at the hotel I checked on the Internet and the Greyhound bus scheduling was ridiculous with crazy long travelling time starting at silly O’clock in the morning. Ok so I need to hire a car so I cycle to the airport and pop in to see Richard at NAC. He recommends Dollar but they have closed for the day. Back to the hotel then. When I arrive they are cleaning my room and I ask how long it will take ?. 15 minutes. The room staff here are a miserable bunch and communicate with you in grunts. Most speak no English. Outside I watched the heron catching his lunch. 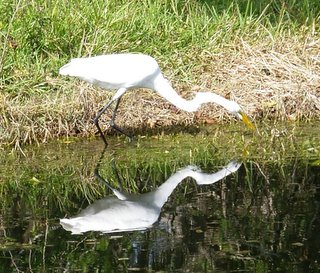 I promised to tell you about doing things with one hand in the USA. Well the most noticeable thing is in restaurants and cafes. All food is served cut up into bite sized chunks so you only need a fork in one hand and you are covered. Everyone drives with one hand usually with a mobile phone in the other. When I’m cycling if I see someone talking on a mobile and doing that walking backwards and forwards thing, I always cycle straight at them to see when they notice me and a look of fear or a scream emerges. Unlike in the movies you even fly with just one hand on the flight controls.

There were no Harley’s about today as it was not their kind of weather so I need to wait for another time to get pictures of them and their lidless riders.

By the way, I googled for "Canola oil" as in that spread I bought. This is what it came up with :

"Canola is a coined word. It appeared out of nowhere and is not listed in any but the most recent reference sources.
The flip side of the canola coin reads: "rape"! You must admit that canola sounds better than rape. The name canola disguised the introduction of rape oil to America.
Canola oil comes from the rape seed, which is part of the mustard family of plants. Rape is the most toxic of all food-oil plants. Like soy, rape is a weed. Insects will not eat it; it is deadly poisonous! The oil from the rape seed is a hundred times more toxic than soy oil."

The spread is in the bin and I have bought some Kerrygold Irish butter.

Tomorrow I want to report on jogging (US style) and hopefully my QXC.

Sorry, you couldn't find the waterfront, it's kinda hidden by the roadbridge and easy to miss if you don't know where exactly to look. The owners name is actually "The", so the name of the place is "The's Waterfront cafe". Here's a link to some more info: http://www.openlist.com/restaurants-view-thes_waterfront_cafe.htm and the map: http://maps.google.com/maps?li=bwp&q=1444+5TH+AVE+S,+NAPLES,+FL+34102

I'm pretty sure it's still there... I haven't been to Naples in a year, but if The's is still there it is definitely worth a visit!