I'm back in Oz and this time I am staying in Melbourne for the summer. I have always wanted to visit Melbourne.

On arrival it was a question of sorting out my unfurnished apartment. I did want to rent somewhere fully furnished but was unable to find somewhere that would accept a six month lease. So it took a few days to sort out some basics and rent some furniture.

I am staying near Albert Park in this block. 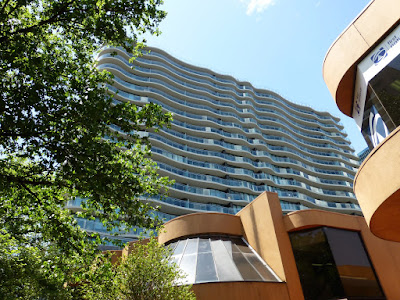 The view from my unit. 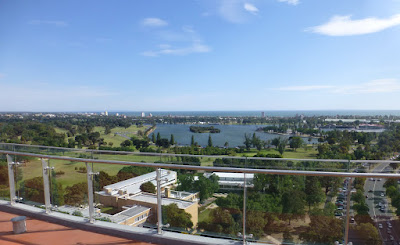 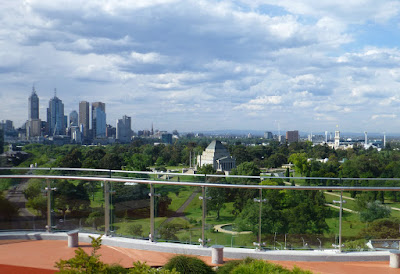 My plan is to watch some cricket, do touristy things and go to the F1 Grand Prix.
Some wine tasting and scenic trips are also on the cards.
I am interested in both men and women's cricket and there are quite a few Big Bash League (BBL) matches here. Can you believe that the last BBL match that I attended in Adelaide back in January was actually rained off. The driest capital of the driest Australian state and the match was called off. There is also the inaugural Women's Big Bash League (WBBL) and I will be attending the local matches.

After the first few days of mainly logistics and dealing with jet lag, I decided to just watch cricket on my first Saturday and Sunday.
On Saturday I got the tram to the CBD and then had a pleasant walk alongside the Yarra River to the MCG. 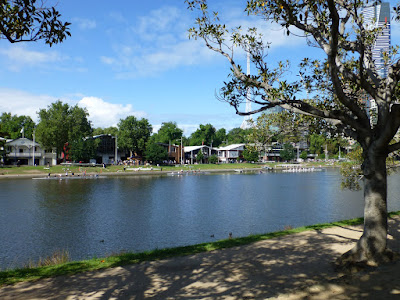 I was watching the first day of a Sheffield Shield match. I new that even though there were some of the worlds best cricketers playing, that there would be a crowd of about 200 in a 100,000 seater stadium. 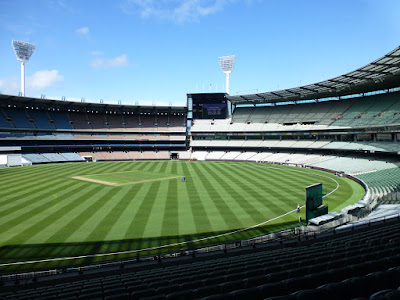 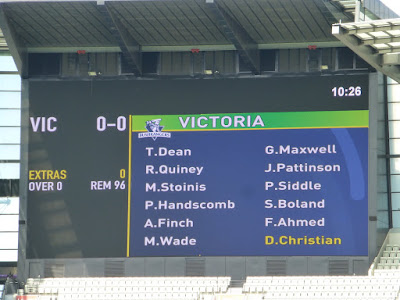 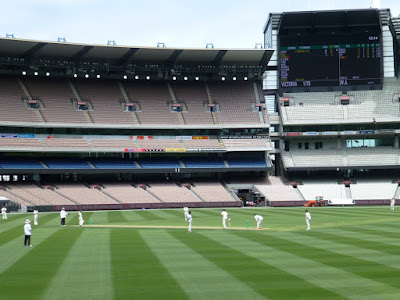 There was a freezing cold wind blowing from the South and by midday I had had enough and gave in and left.
On Sunday, it was slightly warmer and the wind had reduced too.
I was off by tram to watch a match at Toorak Park between two Victoria Premier Women's teams.
A couple of English players were taking part. Danni Wyatt who is in the England squad was playing for Plenty Valley and Izzy Westbury (Captain of Middlesex Women's team) was playing for Prahan. Although I had seen Danni Wyatt play before, I had not seen Izzy in action on the field. I had heard her in commentary during the Women's Ashes series in England. She did sound extremely knowledgeable. I was not sure what to make of her plummy accent.
Anyway here are the teams just before the start of the match. 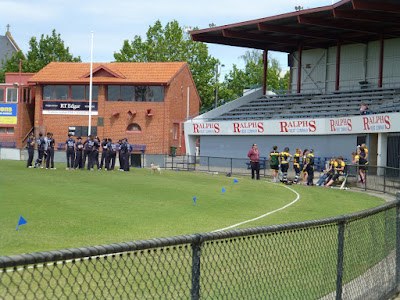 Plenty Valley were batting first and got off to a good start. It was a while before wickets fell and Danni Wyatt came in. 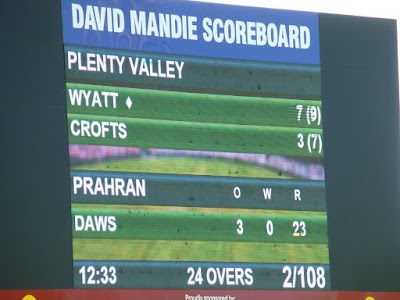 She only scored 7 and was caught out. I have seen those kind of dismissals a few times but know that she can get big scores although I have yet to see one.
It was Izzy Westbury's turn to bowl her spin. 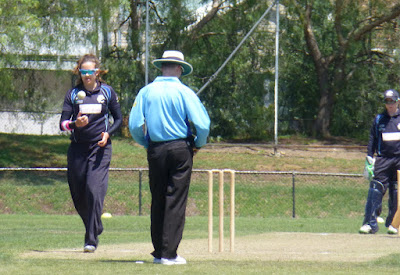 She was soon getting wickets for a good low run rate. 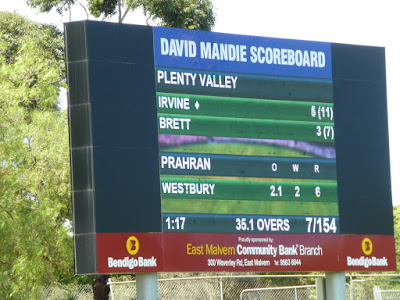 Unfortunately a caught and bowled attempt went wrong and she got hit hard on the hand. Subsequently a fracture relating to the thumb was diagnosed, but during the match she soldiered on.
The final tally for Plenty Valley. 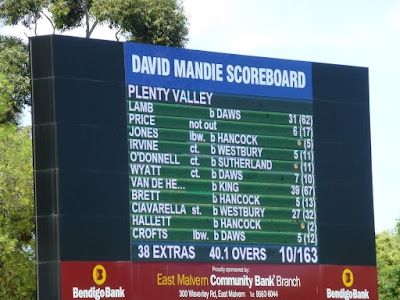 During the break I called in at the local convenience store and on return I checked out what was making a lot of noise on a Sunday. They were erecting this crane right next to the ground. 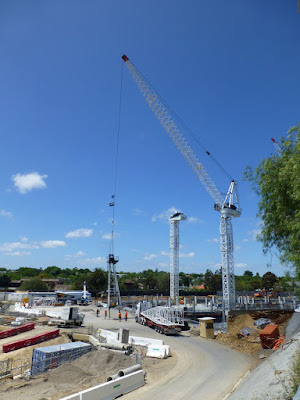 I moved to a more sheltered and quieter spot for the Prahan innings.
Jess Cameron was off to a steady start, but Emma Inglis lost her wicket quite early. They had moved Izzy up the order. 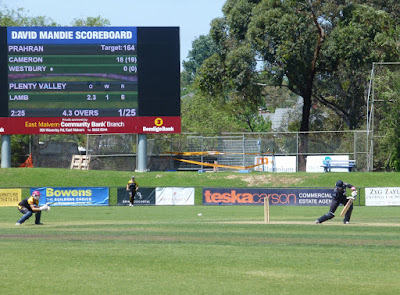 Izzy scored some fours and the stance looked good, but I expect that hand was throbbing. 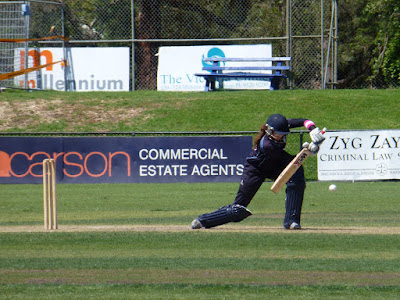 Danni Wyatt was looking on good form in the field. 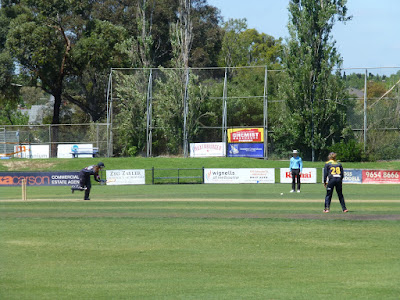 There was even a free hit. 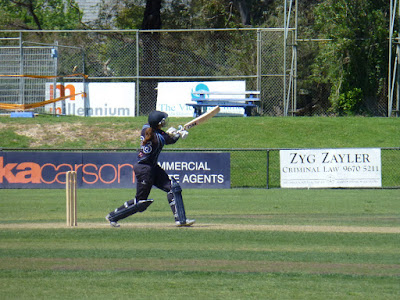 It all came to and end though when she was bowled out for 13. 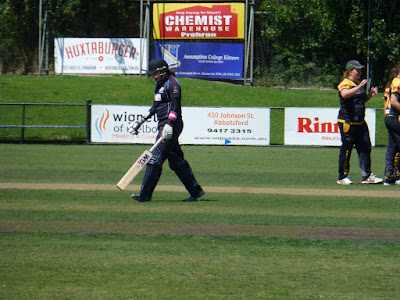 Danni Wyatt with her spin bowling. 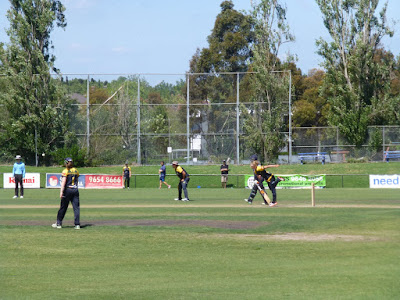 Jess Cameron proved strong and got the majority of the required runs. 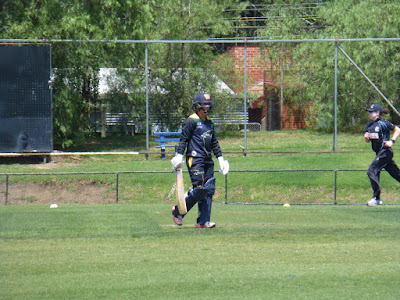 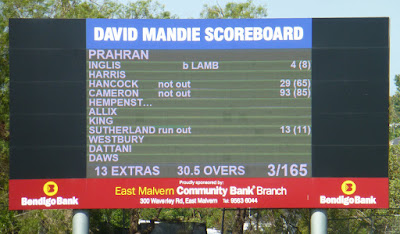 However, Prahan won the match. 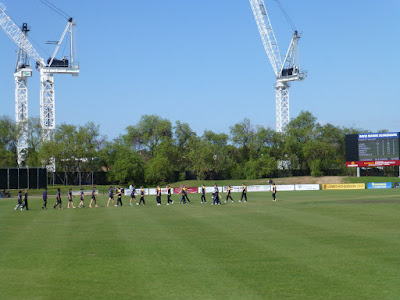 On Tuesday, I went for a walk around Albert Park. There was a strange cloud formation. 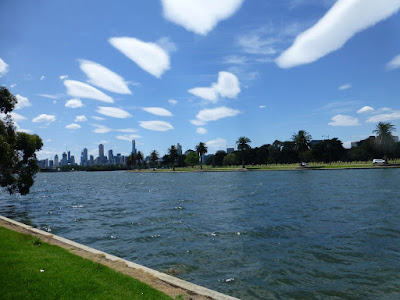 My apartment block is dwarfed by some others. 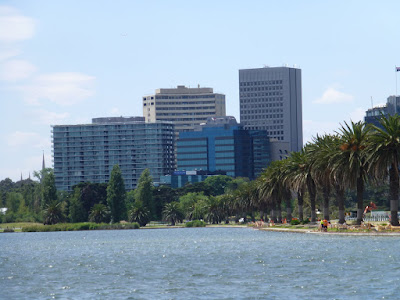 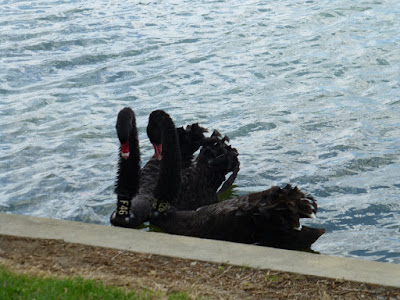 There was an interesting sunset to end the day. 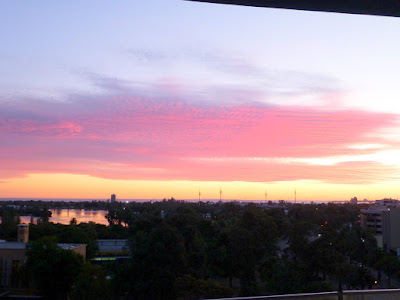 Today I had a walk around the Botanical Gardens. 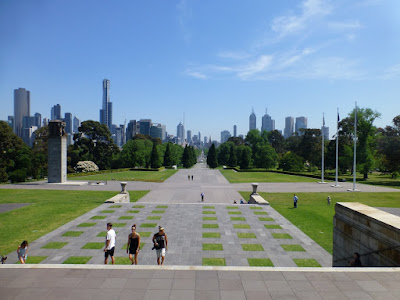 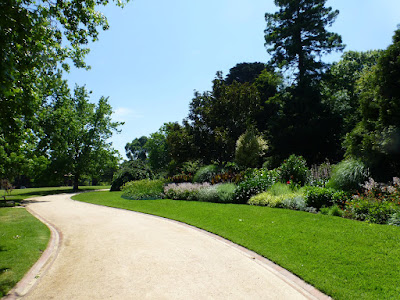 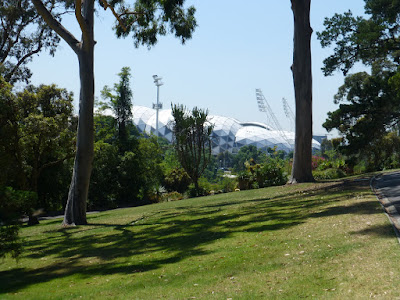 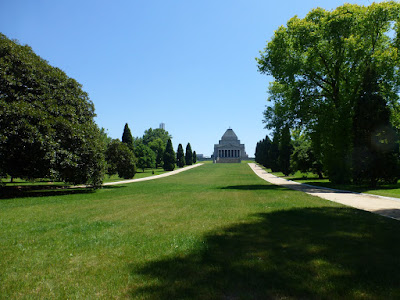 Oh well, that is a week under my belt already.

Posted by peewit at 4:17 AM No comments: