More on the skills test

Met the examiner John Petersen at 13:30 on 27th June. Had initial briefing session. Got keys for G-BNRK and went and checked the aircraft over. Taxied to the fuel pump and had tanks filled to 80% full. John met me at the fuel pumps. Taxied away from pumps after allowing fuel to settle and draining some off for checks, completed checklists and took of on runway 07 at 14:52.
Visual navigation to Devizes (with dogleg around glider airfield) and arrived overhead Devizes at estimated time of 15:21, turned onto heading of 055 for Grove. After 8 nm on correct route when overhead Avebury, John asked me to divert to Kingsclere. Got correct heading and after 24 nm was overhead Kingsclere. Handling and manoeuvres went pretty well. Getting tired now. Flew to Blackbushe but almost started heading on to Farnborough. Joined overhead at Blackbushe for a few different types of landing. They weren’t my best. Taxi back after glide approach and landing at 16:52. Once parked at 16:58 I answered some technical questions re the C152. I knew the answers.
Then back to the airschool offices for a de-brief. I completed the weight and balance + take-off and landing calculations. Then the nervously awaited verdict. Yippeee ! I had passed. We spent 45 minutes going through a detailed debrief of the whole flight. At about 18:15 I called my wife and then drove home in a very happy frame of mind and rather mentally exhausted. Will soon be a PPL(A) pilot but still have oral RT test to do in a few weeks time.

Prior to the test

I had been waiting to carry out a mock skills test and because of poor weather and then when the weather suddenly improved a long waiting list for a slot, I did not fly for 5 weeks. Then on Monday 19th June I did a mock test with another Blackbushe instructor called Nakul. He was very pleasant and helpful. I had planned a route from Blackbushe to Devizes and then to Grove. My route to Devizes had three legs to avoid danger areas and the gliding site as I was flying at low level (2000 ft) due to cloud. Nakul said it would have been better to have planned a direct route with a couple of doglegs around obstacles, however we used my plotted route. I flew in a new member of the Blackbushe fleet. G-CDTX had recently been collected from Germany.
Here she is :- 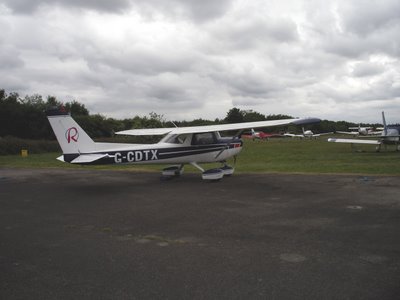 As Devizes was a long way we diverted early and I had to get to a junction on the M4 a few miles north of Newbury. This went well. Then it was the test of handling and lastly back to Blackbushe for some landings in quite a blustery crosswind. At the debrief Nakul went through everything in a lot of detail and I wrote down 26 items that needed improvement. Nakul gave me a very helpful diagram showing the typical thinking and actions during the navigation section. I was a bit down as I still needed to improve. I booked a lesson for circuits and another mock skills test.

On Friday 23rd I spent an hour in the circuit with Andy in G-BZEA. I had not flown with Andy before and it turns out that he too had spent some time at Naples in Florida. For the first time in my UK flying there was no wind at all and now instead of flaring too early, I was flaring a bit late and making a few firm landings. Not a great way of boosting my confidence or the instructors.

On Sunday 25th (the day of the England v Ecuador match) I did another mock skills test with my original instructor Christian. I had plotted a route to Grove and then to Devizes. The cloud was lowish and the visibility poor but I decided to go. We were back in G-CDTX (the C152 that Christian had ferried back from Germany) and I flew to Grove at 2800 ft. The list of items I had made with Nakul were all going without a hitch on this trip. Over Grove and shortly after heading for Devizes, Christian asked me to divert to Popham. Again this went well despite lowering cloud and flying through showers. When Popham was just a few miles ahead we stopped the nav part of the exercise as we did not want to get into the Popham gliding area. The manoeuvres went pretty well. Back at Blackbushe we did just a couple of circuits and then landed as England were approaching half time in their match. Christian said that I was now able to take the real skills test. I booked a solo circuits session (my first solo session in the UK) for 10:30 on 27th with the actual skills test at 13:30 on the same day. I was feeling much happier with my flying skills now and felt that an hour of solo circuits should also help. I had previously been getting concerned at my rather slow progress. Christian said that I had been doing well and explained that for those of double (or more) the age of the younger student pilots, you tend to need double the dual instruction hours.

What next – well I have got some things planned already but I will post these another day. A trip to Switzerland is on the cards.

Posted by peewit at 9:58 PM No comments:

Having had yet more poor weather and delays hindering progress and causing a 5 week period of no flying, today I did my skills test. The weather was not ideal with cloud at 2800 to 3000 ft but at least no rain.
Anyway I passed and am currently weary, happy and have just enjoyed half a bottle of a special red wine.
I will post the detail of the test (not the wine)for those that wish to know it within a couple of days.

I have no problems flying in passenger aircraft and also feel very comfortable in small private aircraft. Yet, when it comes to going up a ladder, I find it really difficult to feel safe. The higher I go, the more my body tenses up and an un-rational fear sets in. This fear is starting to cost me money. I need a sealed double glazing unit replacing. I got a quote of 100 pounds to supply and fit a replacement. The cost of the sealed unit itself was £23.50 so I ordered one and today I thought I would remove the beading on the wooden frame holding the blown unit. When I go up a ladder I seem to become very susceptible to the slightest noise.
Why is that when I am up a ladder the following things happen :-

Some workmen at a neighbour’s house drop a toolbox with a loud crash, shortly followed by my dog barking.
The local council decide today is the day they will send a noisy street sweeper down our road.
Today seems to be the day that jet fighters decide to carry out some low level practice for that forthcoming air display.
My wife starts to play her favourite “Mrs Jones” track very loudly.
Wasps and flying insects seem to find me suddenly attractive.
Even though it is a hot day and I have my head back looking straight up at the thing I cannot quite reach, that my nose starts to run.
The army decide to run a Chinook low and slow right over my house.
Etc, etc. 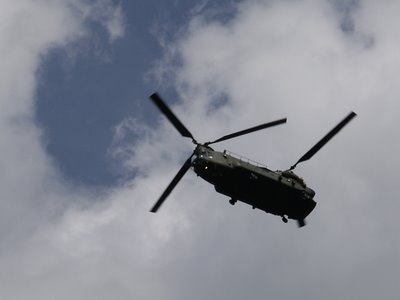 The result is that I am getting the replacement unit fitted by others and just paying for the privilege.

Unfortunately that is not the end of the story as the paintwork on the window frames is in need of some patching up and no doubt after the new window is fitted, the frame will need new paint. I am sure that right now the local police helicopter has picked Bisley for some practice with its infra red cameras.

Oh by the way, I have another date for my mock skills test (the last one was cancelled through bad weather). This time when I came to book because the weather was good and I needed a double slot there was a two week wait and this ends next Monday afternoon.