We are back to proper Florida weather now with it being pleasantly warm all day. I cycled to NAC for 8:45 in a short sleeved shirt.
When I arrived Torsten ( a really nice guy from Denmark) had just completed his first solo. 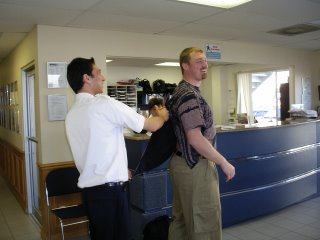 I checked out my aircraft for today. This time it is N945AC instead of my usual one. This is so that you can learn to adapt to the slightly different characteristics of them. For instance 46AC tastes of strawberry, whereas 45 is definitely vanilla.

At 9am I go off for solo touch and go's at Naples. It all goes well pretty well although I did use the wrong call sign once (946AC instead of 945AC) and I missed a call to turn onto a lefthand circuit. I guess that is pretty serious as they were getting busy as it really is Presidents Day on Monday and they have multi-million dollar jets arriving for a three day weekend. I know my PC is able to do multitasking but I seem to struggle with it. Nikki says that it has been "medically proven" that men cannot multitask. Maybe that is right so it seems that the training is designed so that males learn one thing at a time and when that one thing becomes a 'motor response' we can then learn something else. I guess we can't be good at everything. It is tempting to talk about the differences between the genders but past experience has taught me that it usually leads to trouble. Anyway having a slow Cessna in the way of fast approaching jets is not ideal so eventually the tower asked me to land. I think that you need to expect the unexpected when in the circuit at Naples. I did clock up 0.9 hours in the circuit and I was feeling much better overall about the way I was using the radio. I do think this busy airfield training is doing a power of good and will be an excellent confidence booster for when I return to the UK.
Again I was asked to taxi through the commercial jet area and it was even more impressive than yesterday.

After tidying up I managed to get a few requested pictures:- 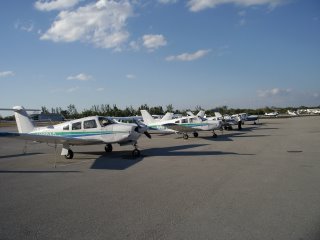 This is a line of Arrows and warriors (I think). 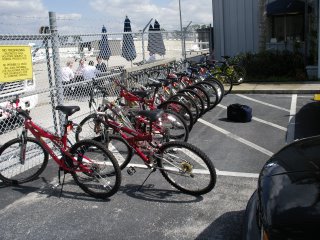 Somebody wanted to know if their bike was still here. Apparently all the bikes were removed prior to Hurricane Wilma arriving. 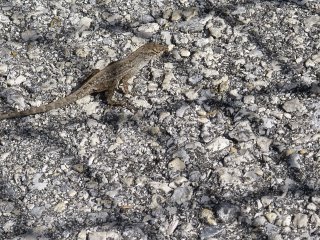 OK nobody requested this but I thought you would like to see one of the many lizards on the tarmac. 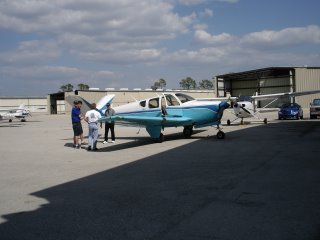 A Beech Bonanza, known locally as a "doctor Killer".

My next lesson was due at 1pm but Nikki said that the tower were really struggling with the traffic and we should delay to 3pm. I decided to go back to the hotel via the store so I could re stock my fridge. My flight bag must have weighed 40 lbs after I had crammed my groceries into it. So my weight and balance was poor on the remainder of my cycle back home. Especially the large bottle of orange juice that was swinging on my handlebars.

I had a good cheddar cheese roll, apple and juice for my lunch whilst reading up on short and soft field landings. Soon after it was time to set off for NAC again. On the way I saw the tidying up after a RTA. 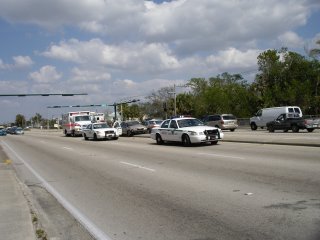 Back at NAC I took some pictures of some birds flying the coup. These were aircraft that have been with NAC for a long time and were flying out to far off pastures. 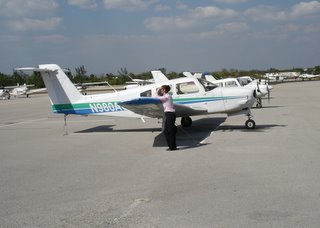 This is Nikki waiting to see them go. 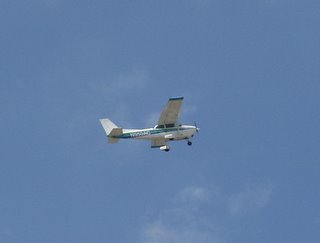 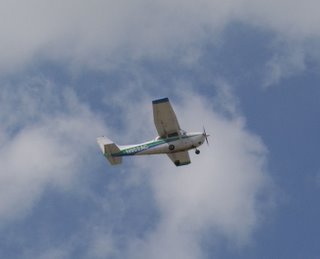 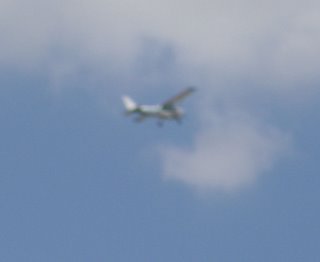 The photographer had stalled and the buffeting caused a blurry image.

Nikki had to change the plans and another student called Mark from High Wycombe and I received some groundschool on PFL,s (Practised Forced Landings) and this is all about getting back safely on the ground in the event of an engine failure.

After this I had time to sit and watch the airfield activity while Nikki went with Mark in a Warrior to do the prep for a solo departure and arrival.

At 4:15pm I checked out N945AC and a little while later Nikki and I departed to do some practical work on PFL's to the south east over some farmers fields. It was a beautiful evening and I really enjoyed the mixture of being able to do some flying away from the circuit and practise the procedures after engine failure. We returned to Naples and could see a big traffic jam on the route 75 to Miami. After landing and the debrief my logbook was brought up to date with my solo work and the 1.4 hour dual flight just completed. I headed home just as it was getting dark but it was still warm.
Tonight my tasks are eat, emails and post blog. I have run out of beer as I could not get another 6 pack on my bike. I wish I had a cool Tooheys New in a stubby holder right now. 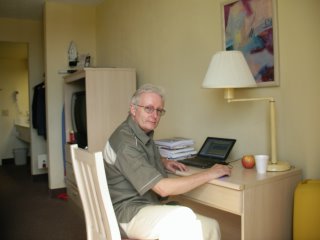 Congrats on your solo flight Phil.

I have only just caught up with events.

You must feel great.

Many thanks, I am still feeling really happy about it. Others say you never forget it.

Why can't you just go to Immokalee or Marco Island if the Patterns full in Naples? IMM is only like 0.2 away...

Immokalee is 25 nm away and the trip there and back would use up too much of your alloted time.
Marco is close but not approved as a training field by the CAA. Something to do with the fire tender response time being 4 mins instead of the required 3 mins.
Although the workload is heavy at Naples I am benefiting from it.
Peewit