Deflation on a Sunday

I never know quite how to pitch this blog because I do not know who is reading it. Should I concentrate of General Aviation stuff on my PPL training and or make it more general. I will continue to do a bit of both so apologies if you find the flying detail boring. Today I am not flying so it will just be the general chat. In fact it is a day off and although I have got some homework and study to do I plan to do this on Monday morning.

It is going to be a lovely sunny day but first thing there is a bit of low lying fog. I have been told by Bea about a place where I can get a cooked breakfast and have my first encounter with an egg since arriving in Florida 13 days ago. So my plan is to cycle to 'First Watch' in Banyan Boulevard. Firstly I pick up some dry cleaning from reception (it is tres expensive so won't be doing this again) and get an update on my bill. Back at the room I have two surprises, one is that shirt I thought I had lost was at the dry cleaners, two was that the $65 a night had to have 6% state tax added and 4% county tax added, and they had taken money from my credit card account without advising me. At 8:15 I dried off the saddle on the bike and set off on my journey managing to avoid highway 41 for most of the way. As I pulled into Banyan Boulevard from the coast road I could smell bacon so I knew I must be close to the destination. There were a large number of people outside the building and after locking up my bike I went in and found a 45 minute wait for a table. I gave my name and went for a walk down to the nearby beach. On the beach were a large flock of birds with long beaks. 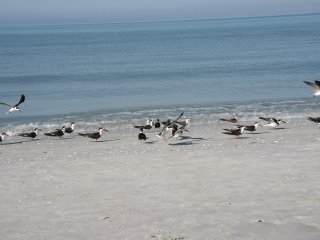 Every few minutes they all took off together making a chattering sound whilst circling and then landing back on the beach. 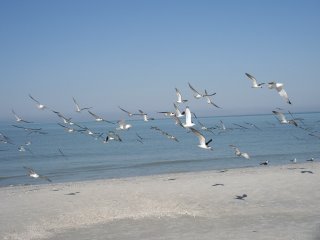 After a while I walked back to First Watch. I saw a Triumph TR something parked nearby so I got a picture of a British classic, my bike, and First Watch with people waiting around for their breakfast. 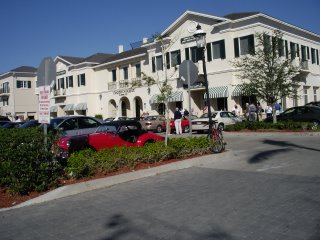 I go and join the throng. I reckon the average age of Naples residents is similar to mine (err that is mature). Anyway one old dear was asking her husband "Did you crack the glass dear ?" What the heck does that mean ?. It soon became clear when he went to their car and opened the window a bit. Didn't somebody once say that "Britain and America were two nations divided by a common language".
A young lady was shouting my name, and my table was ready. I soon had a glass of fresh orange juice, a hot coffee and my breakfast ordered. 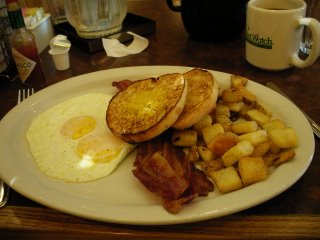 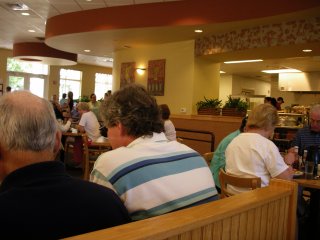 Others enjoying breakfast at First Watch

After an excellent breakfast it was time to hit the beach. I had got a towel and my swimmers and suncream in my rucksack. I unlocked my bike and uh-oh my front tyre is flat and it is a Sunday and this is the furthest I have cycled away from base. I have a look around for other cyclists who might have a pump. None in sight. What the heck, I intended to go on the beach so that is what I will do. I push the bike to the beach and lock it up. I walk down the beach and find a suitable spot and get into sunbathing mode. Some pictures of the beach. Looks lovely. 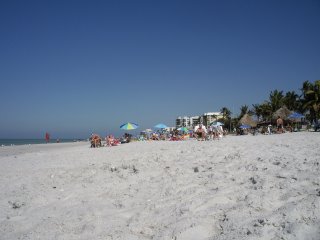 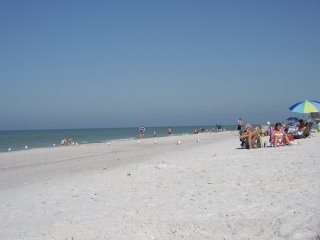 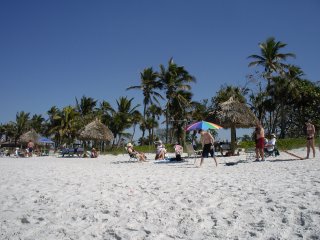 I noticed that quite a lot of people pick up large numbers of shells from the beach. In Oz you would get a hefty fine for doing this. Let's face it if everybody starts picking up this many there will soon be none left. 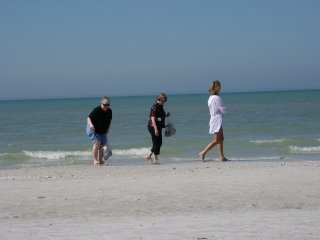 At midday my fair skin was feeling taught and as if it had been smacked so I decided it was time to go. After packing up my rucksack I returned the bike and thought I would to push it up Banyan Boulevard to highway 41 and look for a gas (petrol) station. As I walked back by First Watch there were 4 cyclists going into the car park. I went and asked them if they knew of a bike shop nearby. They didn't but said they were loading their bikes onto the back of their open back 4x4 and I could do the same and they would give me a lift. As it happens they were heading south on 41 so they gave me a lift all the way to the Wellesley. That was so kind of them. They had also had breakfast at First Watch and then cycled to somewhere (I forget) for an ice cream and then back. They were joking (I think) when they said that they were now going to do lunch. They come from Michigan but come to Naples for the winter.
I locked up my bike and rang NAC. I spoke to Richard who was manning the front desk. Whilst I am sure he would have helped if he could, there were no mechanics on a Sunday and to call again in the morning. OK, it is my day off and now it is down to Shanks' pony.
I have also lost my Swiss army knife which is a shame because I have had it for many years. I had an apple for lunch. As my Monday schedule now had an enforced change I did some study and plotted a navigation route from Naples to Pahokee. I would be flying this route under instruction tomorrow. Sunday is Harley day as I can hear dozens of them going by as I study. Florida is one of those states where you do not have to wear a helmet. After my study I decided to walk down to Tin City. It is a collection of shops and restaurants in old dockside buildings. 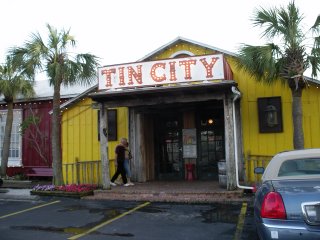 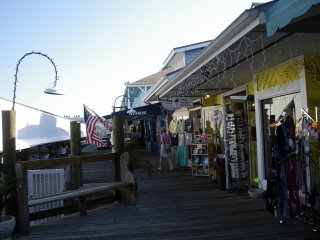 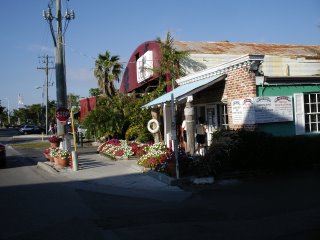 I had a good look around and bought a stubby holder and a bottle opener to replace the one on my lost knife. Here they are. 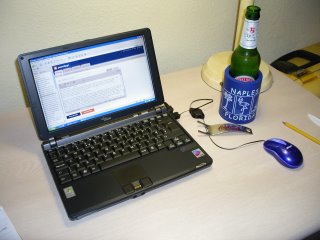 I also located the whereabouts of Pier 41 and CJ's (both restaurants I had been told about).
I continued walking around and saw that you could also buy boats. 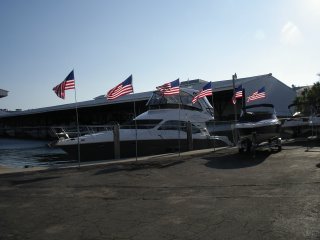 Then I went to Pier 41 and got a table. I had the usual enormous salad and large sliced crusty roll together with two stuffed blue crabs and another salad plus a baked sweet potato. It was helped down with a glass of draught lager. The food her is very good value and the staff are very friendly. 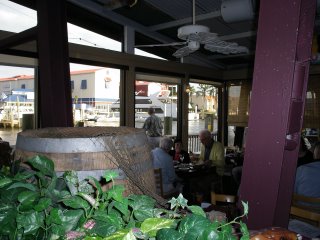 The view from Pier 41.
After my meal I had another walk around and took a picture of a car. 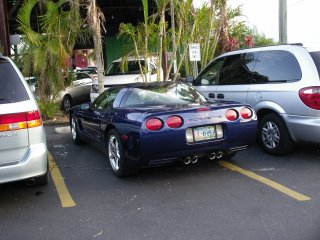 This is what American car companies think a sports car should look like !
I walked under the bridge to get to the other side of 41 and could see some good looking apartments. 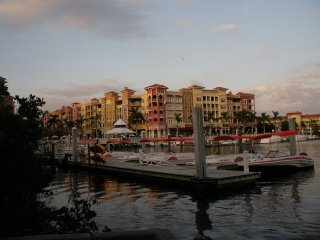 On the walk to the hotel I noticed that some palm trees have fruit on them. 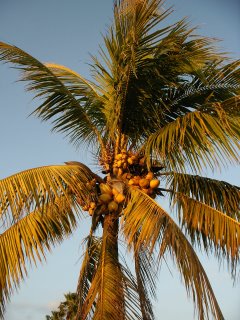 Back at the hotel it was time to do more study and this post.
I feel I could write a book on everything I am experiencing here but this blog is taking up more than enough time so I am just concentrating on the main events.

Hey, glad to see you are having a good time. Just a tip, if you want a cheap way of ringing your family back home, go to www.skype.com and download their programme, you will then be able to ring your family for free. Thats how I plan to stay in contact when I go to NAC in June!

I thought about using Skype but my wife is not up to speed on this and other relatives have no PC's. So although I could have used Skype Out there is still a charge for this. I ended up using a calling card and this only costs a few cents a minute.

All the best
Peewit