Snow on the ground and a tour of Italy

Snowing !!!!, yes but not here. I spoke to my wife Jenny at lunchtime and she said there was snow on the ground back home in Surrey. Whilst I was talking to her I looked up the current Metar for Naples and it gave the temperature as 26 degrees C and it was sunny outside.

My day started early with a cycle ride in at dawn. The sky was perfectly clear at my hotel but as I was cycling towards the airport I could see a sort of grey merkiness in the distance. This was FOG. Oh shoot !!!, I new that my planned solo flight to Immokalee for soft and short field takeoffs and landings was under threat. When I got to the airfield it was all rather quiet, the ramp was full of aircraft and the fog was there. OK so it would lift later. This gave me a chance to complete my planning for the dual cross country training trip to Charlotte County and back via Class C airspace. The planning took a while and although the fog had gone at Naples, it was still present inland and further up the coastline. The morning passed and some of us sat out at the tables on the ramp chatting about our progress and setbacks. Thorsen was due to go on a cross country to Venice but the fog was only clearing slowly there. Eventually he was given permission to depart on the basis that it was clearing and should be gone by the time he arrived. Here he is preparing for the flight. 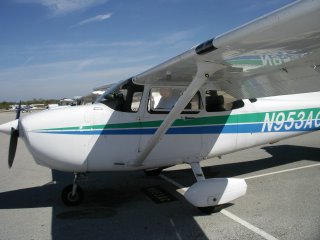 I checked the weather again at Immokalee and it had a visibility of 1 mile and was clear below 1200 ft. So even though it was 11:15am it was not clearing. I went in to see Nikki and she said that I could do touch and go’s in the circuit at Naples if I wanted. Yes I wanted to do that. She said to do some flapless and glide approaches as well. At 11:48 I started up and taxied out to runway 23. I did the power and pre takeoff checks and lined up short of the runway. I called the tower but was asked to hold. A queue of us had to wait for 15 minutes whilst loads of aircraft landed and a couple of big jets jumped the queue and took off. At last I got clearance to go but as per usual it was not a case of hanging around on the runway as other aircraft were on final approach. I got airborne and into a left hand pattern. I was sent a long way downwind on my first circuit and I thought that it was getting a bit silly. Obviously the tower were under pressure but eventually I came back for my touch and go. Suddenly it was quiet and the traffic had gone because I got several circuits in almost on my own. I did one with no flaps and the tower called and asked why I had not turned onto base. I said I wanted to extend downwind a little to do a flapless approach (it requires a shallower approach angle) and the tower asked what I meant. Apparently flapless approaches are not part of the FAA training. I kept going in the circuit and was they were going well with some excellent landings. It was coming up to 1pm and I thought that I had better land as I was hoping to do my dual cross country trip a little later. I requested a full stop landing and was back at the ramp at 13:06pm. Nikki was out with another student and so I had a few minutes to grab some food, chat with other students and check the weather. The winds aloft had changed and this messed up my planning.
Someone who had just had his birthday was brought along to have a look at some aircraft. Once in the cockpit the door was shut and he was off on a unexpected trial flight with an instructor. What a nice surprise. I think he enjoyed it. Here is the lucky birthday boy. 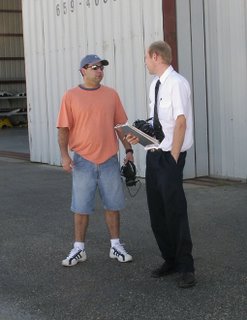 Once Nikki was back she had a debrief to do and to see the CAA inspector who was checking the PPL training and have some lunch. She kindly checked my revised chart and plogs whilst eating her sandwich. The plan was to go at 3pm. I checked over the aircraft again and got the weather at Charlotte County (also known as Punta Gorda). At 15:06 we started up and were soon on our way. The flight went well. As we got to Charlie airspace I called Fort Myers approach and they diverted us along the coastline and gave us a squawk code and an altitude to maintain. This was taking us away from my carefully planned route but part of the training is to be able to decide where we are and set a new route to the destination. This is done using the chart and the VOR radios on the aircraft. All went well and we arrived at Charlotte County and I had checked the weather and knew which runway was in use (21). There was little traffic and I used the local frequency to let others know that we were landing at 21 on a left hand pattern. The touch down was smooth and we turned off onto the taxiway. There were a few minutes now to sort out my paperwork and prepare for the return trip. After more power and pre takeoff checks were off again. The return trip also went well and was a bit quicker with a bit of a tailwind. The join at Naples were fine and Nikki helped spot the other landing traffic as were number 5 to land to start with. My landing was probably about the worst I have done so my good trip was spoilt by a poor touch down. Whilst taxing back to the ramp Nikki said “ If you have time to spare, go by air”. This refers to the fact that there is quite a lot of time used in planning the flight before you leave, so even though the slowest plane flies direct at a 100mph it may be quicker to jump into a car and set off straight away.
As the aircraft was shut Nikki said which way did I want to go on my Qualifying Cross Country (QXC) tomorrow. Yippeeee I had done well enough to get a pass to do this important trip.
After the de-brief it was time to go home. It was dark outside and I fitted my Walmart lights to the bike. It was still pleasantly warm as I cycled back. On the main road a couple of Harley’s went by with their distinctive ‘potato potato’ sound, whilst two police cars with sirens and flashing light headed in the opposite direction. The sky was clear and I really felt like I was living the American lifestyle. OK a buzzy flying insect flew in to me and almost went down on the inside of my shirt and whilst recovering from this I just missed a trash can that the residents seem to like to stick right in the middle of the sidewalk, but I was feeling elated. I got back to the hotel at 7:30 and had a lot to do. I caught up on emails and decided I was too hungry to start work on the nav planning or blog next. So I walked the 30 yards to the Olive Garden and had a ‘Tour of Italy’ meal (as recommended by Richard) and a glass of Australian Shiraz. The meal was good and so was the Shiraz. I have a couple of good bottles of Shiraz at home but cannot open them for another 6 years.
Having eaten well it is now 11:20 as I write this blog. Maybe I will get up early to do my QXC planning.
The Olive Garden serves good food at reasonable prices (although my brother in San Diego says the ones there are poor). I noticed that they have very wide chairs on rollers. Here is why. 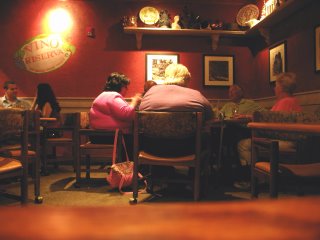