Today is to be the day I do my Qualifying Cross Country (QXC). I didn’t get to bed last night until 12:30 and then was up again at 5:30am to do the necessary chart plotting and planning. Having completed this I looked out of the window and was disappointed to see a rather gloomy outlook. Anyway I needed to get going so I showered and then thought I ought to wear one of my two remaining properly laundered shirts for the occasion. I had a white one and a blue one. I was thinking that I will also wear one when I do my skills test with Andrew (the CAA skills test examiner) in a few days time. At NAC they have a dress code for career pilots and this includes a white shirt. I thought that if I wear a white shirt for my skills test then Andrew might think that I was on the career pilot course and be tougher on the test. I suspect that my grey hair may have dismissed that thought but I decided to save my blue shirt for the skills test. So it was the white shirt then and when I removed it from the dry cleaners plastic bag it had a little tag saying that they had tried and tried and tried to remove all the aircraft oil and grime but had failed.
I made up a pastrami roll to take with me for lunch. Now here I can give you a couple of tips about buying food in the stores. This is a spread that I bought. 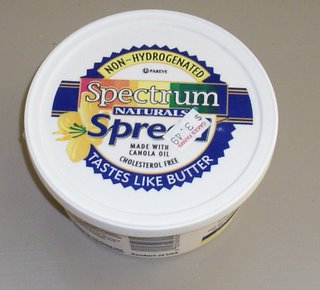 It says it “tastes like butter” which it may, but it has an awful smell so you will probably not want to eat what it is spread on. So when selecting a suitable food item use the 5 S’s. They are Shape, Size, Smell, Sweetness and Shiggy factor.
Shape and Size are easy to tell. Smell – well now you know that is also important. Sweetness – a lot of the food here is way too sweet for my taste. Lastly there is the Shiggy factor – well you want to be in a good condition to fly the next day.
My bag was packed and it was time to go. It was mild enough whilst cycling but the sky was a UK grey colour and there was a dampness in the air. At NAC everyone was checking the weather outlook and it was not encouraging. I know this happens in England all the time but I did not expect it here. Just been spoilt by the daily good weather so far. There were three of us all booked to do the QXC and just like all the students it was a question of waiting for the weather to improve. We were waiting in the front desk area when a seemingly never ending chain of school children filed past. My first thought was that this was the new intake for the next Career Pilot course, however they all trooped out onto the apron to be shown a GA aircraft. 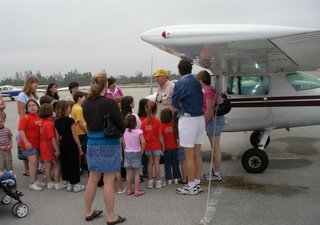 Here are some of them being shown an aircraft and you can see the overcast sky in the background.
A little while later they all filed back through the reception again and Bea gave each one a special NAC pencil. 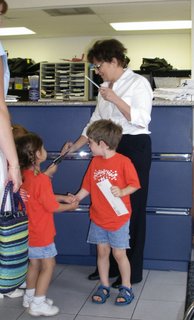 The cloud base was lifting very slowly and so Sery (an English flight instructor) found a video for us to watch. It covered all the processes that go on in the flight deck of a Virgin 747-200 flying from Gatwick to Miami and back. I found it very interesting. Nikki and Sery said they were getting some sandwiches did we want to add our choice to the order. Yes please, now I won’t have to eat my roll with that spread on it. Half an hour later Sery returned with the food and I had a Popeye wrap. It was lovely.
By 1:45pm the weather was much better but not quite good enough and it was now too late to go. So we now know how you feel back in England when this happens. At least it was warm and the sun was coming out. Nikki said that she would take us over to the tower if we wanted and soon we were on our way. 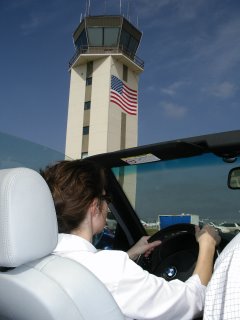 Inside the top of the tower everyone was putting faces to the voices that we had been hearing over the airfield radio. We were given some explanation of what they do and I took some pictures. 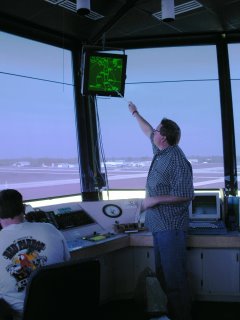 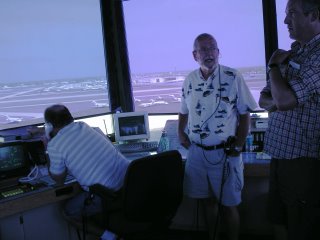 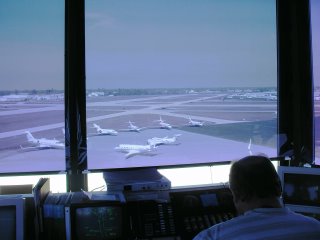 We had enjoyed our visit and then returned to NAC. We sat out in the now hot sunshine for a while and then I decided to go home so I could take the opportunity to go out and get some provisions (using my 5 S’s criteria). This was all accomplished and as I got back to the hotel this bird (maybe it is an Ibis) was on the car park perimeter. 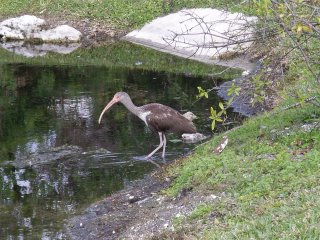 I’ve now got my fingers crossed for tomorrow and at least I should get a full night of sleep.