My first flight in the USA

Having survived the journey to Naples, today I was due to start at the flying school at 11:30 am. This blog is one day out of date because so much is happening I am just not getting enough time to keep it right up to date. This post is for events on 7th Feb.
I still had the hire car and needed to return it at Naples airport this morning. At 9:15 I drove to the nearest Walmart hoping to buy a mountain bike for only $53. As it turned out they only had a few bikes available and these were mainly ladies models. This combined with the fact that I could not pay for a bike now and pick it up later meant that I did nothing and got back into the car and drove to NAC. The idea was to just let them know I was in Naples and then return the hire car and come back. I met Bea at NAC and had friendly welcome. I had been in touch with her by email as she looks after a lot of the admin at NAC. I also met Richard who owns the outfit. He was also helpful and friendly. I then took the car to the National car rental lot that was at the main passenger terminal rather than the GA terminal. I got the car handed over and a lift back to NAC in time for my 11:30am start. 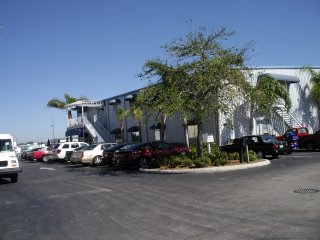 Here is the NAC building. 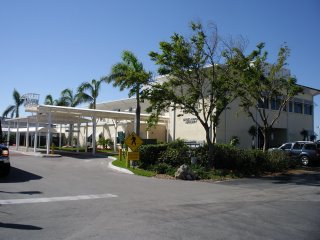 And this is the GA terminal just a few yards away. There is not much of interest in the terminal although there is a cash michine and some food and drink dispensing machines.
My first task is to fill in the various forms at NAC and for Bea to provide any items that I would need to purchase. I already had a headset, chart, kneeboard, C152 checklist but did need to purchase a C152 POH, a US airport directory and a block of 'Navigation Log' sheets.
My instructor will be Nikki (she is English and Richard Jentil's wife) and I am to meet her at 1pm. So I had time to go and get some lunch. Bea gave me a Naples street map and some directions to a cafe that was just 10 mins walk away. Whilst walking I took a picture at the entrance to the GA terminal road. 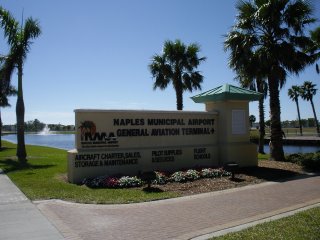 I had a Grouper sandwich that was served with an enormous salad and a diet coke for my lunch. All the water in Naples seems to have a very strong Chlorine taste to it and this must apply to the copious number of ice cubes put into drinks. I had also noticed a strong Chlorine smell in the hotel.
I was back at NAC for 1 pm and I met Nikki and filled in more forms and she checked over my training records. ( I had already clocked up about 12 hours at Blackbushe, although it was over a 6 month period). I found Nikki also very friendly and helpful. She briefed me on what we would do on our first flight and I went out and checked over N946CA. 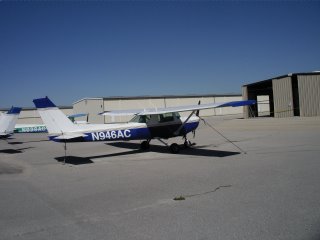 Once I had checked over the aircraft, Nikki joined me and we started the engine, did all the pre flight checks and got permission to taxi to runway 23. Nikki was going to do all the radio calls and this flight was to be both a way of checking out my general handling but a bit of a site seeing trip as well. I took off and we headed south along the beautiful coastline to Marco Island. The weather was perfect and the sun just light up the whole scene. I must say that Nikki made me feel totally at ease and I feel that she is a good instructor who will ensure that you learn almost without realising how it is happening. Obviously I would expect her to be tougher after a few more lessons. During the flight we covered general handling, turns, stalls, slow flight and we eventaully returned to the airport where my landing was a bit high on the approach but the landing was OK. Nikki had also pointed out a lot of useful Visual Reference Points for future use. Back on the ground I taxied back to the ramp and went through the various shutdown procedures. At NAC the C152's are not parked with the brakes on but tied down and if your interested they never use the primer so engine starting can be slightly tricky.
In the debrief she said that I had done well although I had forgotten to apply CARB HEAT. What a dreadful error, I felt really annoyed with myself and was surprised that she had not pointed it out at the time. In fact she had put the carb heat on for me and was waiting to see if I forgot it again which I did. Even though Nikki made absoluteley no fuss about this, somehow I do not think I will forget it again. One of the great things about this kind of training is that you keep building on the previous lesson and there are no long intervals between lessons that can cause one to get rusty. My other fault had been that I had lost a couple of hundred feet of altitude when lowering power for slow flight with zero flaps. My flying time was 1.2 hours.
After the debrief Richard said would I like to put some money onto my account and suggested $1500 would suit. This I did but I must remember to get a printed statement of where my initial $500 deposit was spent.
I then read through the NAC operations manual and signed to say I had done so. The manual seemed much smaller than the one I had been reading through at Blackbushe.
My next lessons were to be at 7am and 1pm next day.
I decided to hire one of the NAC bikes and it did meet the standard that other PPRUNE contributors had mentioned. ie Worn out, rusty, gears that you dare not change, brakes not working, uncomfortable and badly adjusted saddle, wheel bearing that clanked as if they were breaking up, no lights. I did buy some WD40 and try to sort a few things out and here is the result. 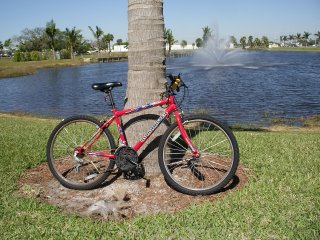 I had really enjoyed my first day at NAC and was looking forward to the coming days despite the possibility of early morning starts.
Sorry if this detail has been boring but it is stuff that I would have liked to have heard about myself.
In my next post I will cover my eventful Wednesday.