Sorry my blog is a bit behind actual events but I hope get it fully up to date on Sunday. As well as being a day behind on what is going on here in Naples, by the time I write it up in the evening it is already the morning of a new day back in the UK.
My lesson was due for 7am. This meant getting up at 5:30 to give me time to do a bit of study, get showered and dressed and have some breakfast. The buffet style breakfast at the Wellesley Inn starts at 6:30 and is quite limited in choice. If you like sweet muffins for breakfast then good. I just have enough time to cram down a couple of bagels (I'm sure there is sugar in them too) and a plastic beaker of orange juice. By 6:40 I need to be under way having unlocked the bike from the rack near the pool. It is dark but the sky is beginning to lighten and there is quite a strong breeze. I am glad I am wearing a fleece lined jacket whilst pedalling into the headwind. I get to NAC just before 7am after a really bracing ride. Nikki (my instructor) runs through the brief for circuits. It is a different pattern to the one I used at Blackbushe. The wind is quite strong but it is almost down runway 05 which is one of the two runways that are at 90 degrees to each other. We are flying in N946AC (nearly all the NAC fleet call signs end in AC so you can only abbreviate the N from the call sign). After checks and startup and a long taxi to the hold for 05 we start the circuits. The things that are different are that they want you to stay very close to the airfield. The circuit height is 1000ft and because you are close to the active runway on downwind, when just in line with the end of the runway on downwind you actually start your descent by reducing power and slowing down until you can apply 1 stage of flap and speed should be 70 knots. At 800ft you turn onto base and apply the next stage of flap and speed is 65 knots. At 600ft you turn onto final and apply full flap with speed at 60 knots (all C152 figures). You do not have to call final as you get landing clearance when mid downwind.
I found it tricky learning the visual clues for when to turn because the circuit direction changed during the lesson and the cross shaped runways all look the same. I also had to orbit to allow other traffic to land. The landings were tricky and there was quite a strong crosswind. A couple were a bit bumpy out of the 6 I did. After 1 hour I was mentally tired with the workload even though Nikki was doing the RT. Back at the school we had the debrief and Nikki said that I had made quite a few mistakes but that this was to be expected in a new environment with different patterns and procedures. She said practice would sort it out. My next lesson was booked for 1pm so I had time to cycle back to the hotel. I took a photo of the Pilot Shop just across the road from NAC. 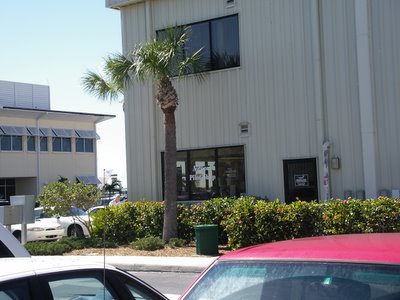 Back at the hotel I re-organised my flight bag as I was having to carry this on my cycle trips to and from NAC. My kneeboard needed sorting out as well in order to show all the different bits of data required. There are no locker facilities for students at NAC. I also fitted some lights on the bike. All this cycling was making me hungry so at lunch time I walked half a mile down the road to Joes Crab Snack restaurant and had a crab cake sandwich. It was good, but in Florida they always seem to want to give a salad and bread with everything you order. So my large salad and two types of bread arrived. The salad was only slightly spoilt by the sweet salad dressing. When the sandwich came it had salad in it and was served with french fries and a cole slaw salad as well. I really could not eat it all but I did enjoy the food together with a diet coke full of chlorine smelling ice.
Here is a picture of Joe's 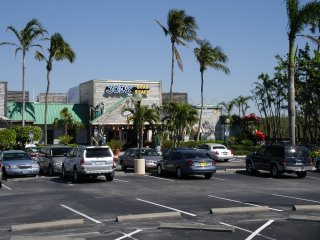 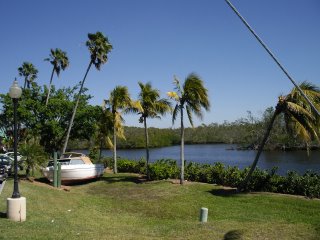 Back at the hotel I picked up my flight bag and got the bike. It is not every day that you get a heron just by the car park. 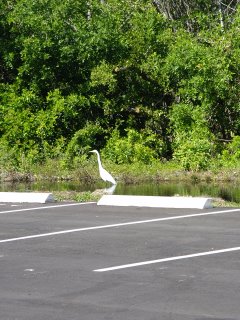 At 1pm I am back at NAC. We are due to fly to the south east and practice steep turns. This time the C152 is N938AC. The wind has moved to 330 and the active runway has changed to 32. We are taxing down and following another Cessna that almost crossed the new active runway. Whilst he was doing a 180 we turned left onto the correct taxiway for 32. During the power checks we have a problem with the right magneto. I use the clearing procedure and whilst it was better it was still lumpy. Nikki gave it another go but then we had to taxi back to the ramp with the aircraft unserviceable. Instead of a debrief, Nikki went through the things that are covered in the flight test. She asked me to read up the systems section of the POH as my homework. I am due back at 7am next morning. On my way back to the hotel I bought some biros, water and WD40 at a Seven-Eleven. Just as I was crossing the main highway during the few seconds that pedestrians are able to cross, the plastic bag burst and so I was scrabbling to pick up my shopping before I stood a chance of getting runover. I managed it, but the US is definitely structured for cars and big cars at that. Pedestrians and cyclists are not well catered for but there is a route between NAC and the hotel that is 99% on footpaths. I was back at the hotel at 3:30pm and I sprayed copious amounts of WD40 on parts of the bike.
A bit later, I cycled to downtown Naples which is full of expensive looking shops amongst expensive looking houses. I went to the beach and it looked great. Nicer from the air though. 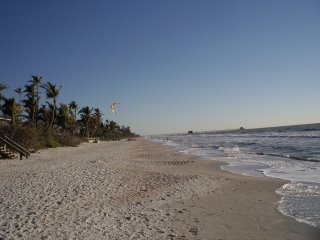 Naples must be an area for the well off, and the number of exec jets parked all over the place at the airfield also indicate this.
After my beach walk I took a different route back to the hotel.
Again I was hungry which was a surprise after my large lunch. A good meal of bread, salad, jacket potato and BBQ ribs washed down with a beer and then a glass of Australian Shiraz removed my hunger pains. All I needed to do now was walk back to the hotel, email my family and update the blog for the previous days lesson. I do not know how you are supposed to fit in all the study required for those that have to sit the 7 exams. I would be exhausted. I just needed to get ready to be up again for 6am in the morning.

This is not a holiday but I am enjoying every moment and excellent weather with clear blues skies certainly helps.

Hey, funny thing is that Joe's Crabshack is a chain restaurant and most of their food is actually delivered frozen and not really very fresh. If you want real nice local seafood try "The's waterfront cafe" across the road from the crab shack. Much better! Yumm.... :-)

Many thanks sun'n fun.
That kind of local info is a great help on my first visit to the USA. Will definitely visit the Waterfront Cafe.