I went for a walk yesterday that involved 4 ferry rides, 3 bus journeys, paddling on a beach and a walk through the bush.

The weather was better than forecast with almost continuous sunshine and maximum temperatures of 27 C.

Should I bother trying to upload some of the photos that I took ?
I can probably read a couple of Terry Pratchett novels in the time it takes to do the uploading but I’ll give it a try.

I was heading for the northern tip of the Royal National Park as this is quite close to Sydney.

My journey started by catching the 8:30 ferry from McMahons Point. I was probably the only ‘tourist’ and all the other passengers were off to work in the city. The ferry ride to Circular Quay only takes 7 minutes but it is one of the best in the world as it travels under the harbour bridge, then passes the opera house before terminating at the bustling quay. Having made this trip many times before although I enjoyed the views, I was not photographing them yet again.
Normally my journey would continue by train at the handy station in Circular Quay, but due to track works down the line they were running buses. The pickup point for the special bus to Cronulla was at Hyde Park. It was probably only a 20 minute uphill walk to get there but I decided to catch a bus as there would be plenty of walking later in the day. So a quick trip on a 333 (bus to Bondi) got me to Hyde Park.
Hyde Park is a very pleasant green space in the city and has fountains, many trees and places to relax. On this occasion I was just waiting at a bus stop in Elizabeth St. My bus was due at 9:11 but did not arrive.
While waiting for the bus I had the unusual spectacle of a white van stopping in traffic at the opposite side of the road. What made it unusual was that the moment that it stopped the driver started playing the drums. Yes, real drums, he must have had a drum kit in the passengers seat and here he was beating out a drum solo until the traffic lights changed (they take a long time in the city). 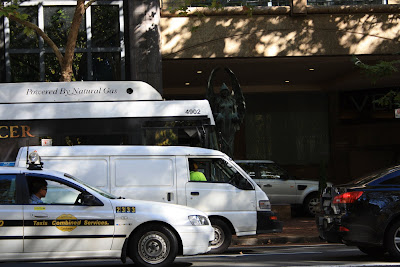 The expected time of the next bus also passed without it arriving. Dozens of other buses were coming by and picking up loads of passengers for other parts of Sydney but not my bus. I had got the information on where to get the bus by looking at the Infoline website. I decided to ring them. After entering all the required numbers requested by the automated answering system I eventually spoke to a human. I was in the wrong spot. I found out where I was supposed to be and reported that the map on the website was wrong. In Sydney you just know that they are generally rather lazy and treat work rather like early retirement and so the information about the incorrect data on the website would be ignored and many other passengers will have the same problem. It is very easy for non Australians to do well in their careers here because they always standout when compared with the locals who are just wondering about when the next coffee break is and will the surf be good later. After a short walk around the corner into Park St I was in the correct place and duly caught the special bus to Cronulla at 10:06.
It is a pleasant bus ride in a southerly direction that goes underground to get through the city, passes the airport, travels by endless beaches at Brighton le Sands before heading back inland. It is not long before the bus turns left off the Princes Highway toward Cronulla.

Cronulla has similar geography to Manly in that there is a headland separated from the mainland by an isthmus. This gives it two good beaches, one facing the ocean and another on the sheltered side in Port Hacking (named after first fleet quartermaster of HMS Sirius, Henry Hacking). The bus stopped by the Cronulla railway station and I then walked a few yards to the subway and through to the south and Port Hacking side of Cronulla. A couple more minutes and I was at the Gunnamatta Bay ferry quay. It was 35 minutes until the next ferry so time for a coffee and snack. 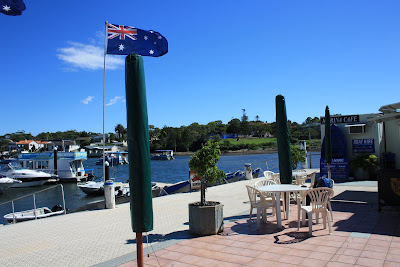 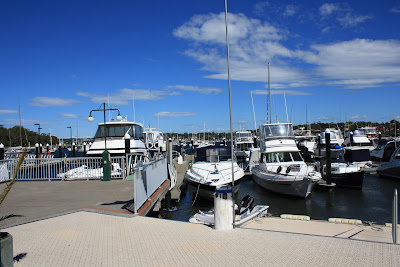 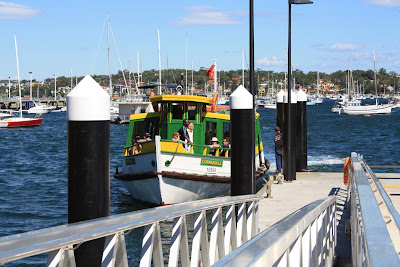 A dozen or so passengers boarded the ferry for our trip to Bundeena. 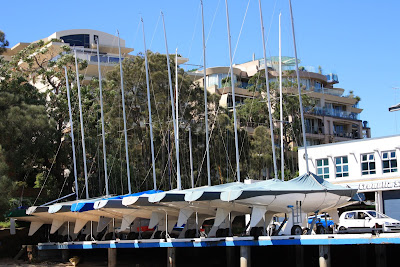 Yachts at the Cronulla sailing club.

The ferry burbled it’s way across Port Hacking. As it is shallow over vast areas, the ferry followed a well marked channel. The sun is shining and there is a pleasant slightly cooling breeze. Soon we moored at a sunny Bundeena.
Bundeena is one of the few towns within the Royal National Park area. It is easy to get to by ferry but probably quite a long drive by car. The houses around here look really nice, I must look on the web and see how much they cost to purchase.

I did follow some signs for a memorial walk and this took all of five minutes to complete. Then I crossed over a green space and took the ten minute walk to the start of Jibbon Beach.

This is now the proper Royal National Park and there a just a few people at this end of the beach. I take off my secret socks and shoes and paddle my way along the beach. 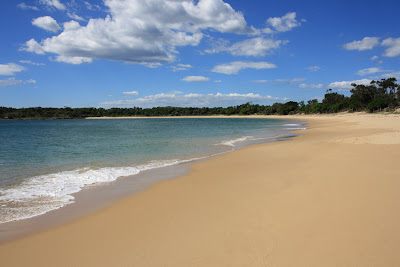 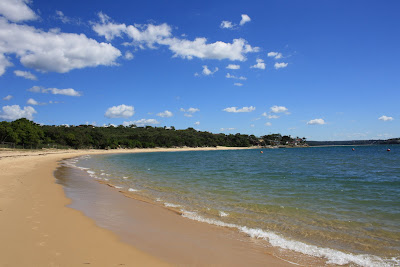 Looking back towards Bundeena

At the end of the beach I sat on a rock and spent ages removing the moist sand from my feet and getting socks and shoes back in place. The walk from here follows the rocky headland and is a mixture of narrows tracks through fairly overgrown bush and open rocky areas right on the coastline. It is quite hot and I do not feel 100% comfortable brushing my way through the wattle with my exposed bare legs. There are plenty of lizards around but they are all small and timid. They are species that I do not recognise.
The track comes out right onto the rocky coastline on occassions and you can see the distant city on the horizon. 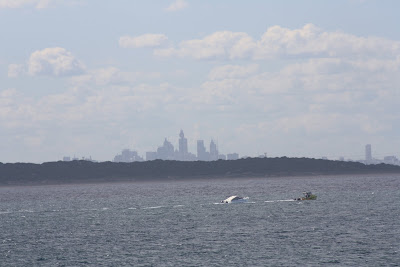 After a while you arrive at Jibbon Head which has a magnificent view looking out across the ocean. You have a got a 270 degree vista of blue water from the ocean and right round to the upper reaches of Port Hacking. There is not a soul around and I sit on a rock, eating my sandwiches in the sunshine. Unfortunately they have yet to make a camera that can capture the look and feel of a view like this.
After my lunch, I set off along the coastal path. It makes the occasional foray back into the bush and it was on one of these stages I was confronted with a snake right in the middle of the path. It was only about a foot long, jet black with red at ground level. It spotted me and slithered out of the way. I was frankly a bit spooked having never seen a snake in NSW before (I have lived here for a year on and off). I smartly skipped by the area where the snake had been and continued with a greater degree of caution. Later I looked the snake up on the web. It was a red bellied black snake and highly venomous. There are warnings about them being around in the Jibbon area on hot days. It was just as well that I had not seen the warnings.

I continued in and out of the bush along the track until arriving at a beach. Here looking out to sea there was Jibbon Bombora which is white water caused by a large underwater are of rocks. 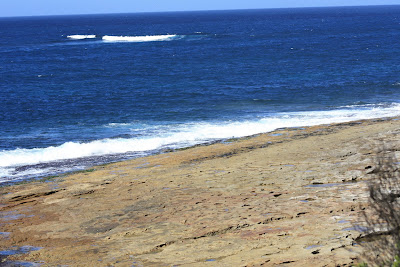 This is the point where I left the coastal path and took another path that went through the bush and back to Jibbon Beach. Luckily the path was through quite open bush and there were not too many places where you had to crouch down and push your way through the overhanging growth. Soon the bright blue of Port Hacking came back into view. A little while later I paddled my way back along the still sunny beach. Another long session of reapplying socks and shoes then ensued. I strolled back along the hilly walk to the ferry quay. Along the way I saw some Galah. 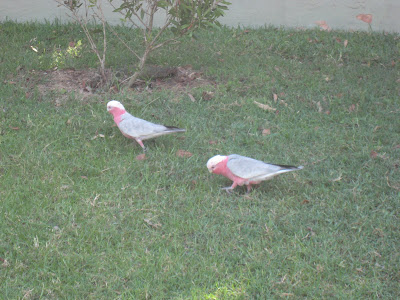 Near the ferry quay I felt it was my duty to buy an ice cream and went into a store and bought a classic Magnum. Sat in the park to eat the ice cream while looking across the other local beach in Bundeena.

As I walked down to the ferry I saw a mermaid. 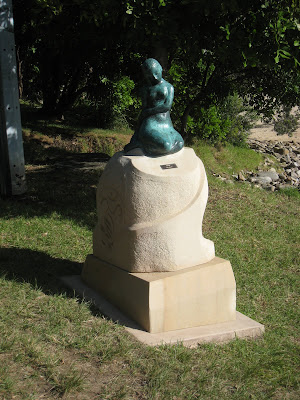 I took a photo looking out from Port Hacking towards the ocean. 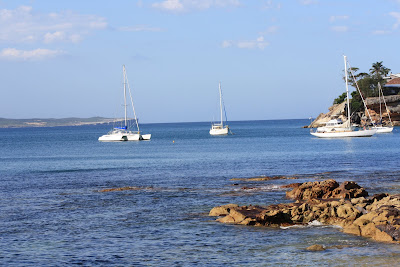 I caught the 3pm ferry. 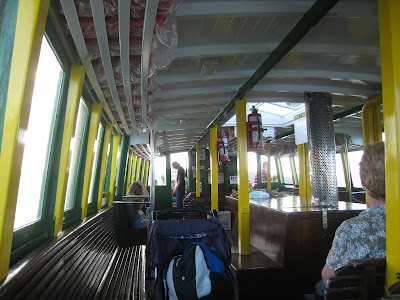 Once I had bought my ticket I then went and sat outside at the stern. 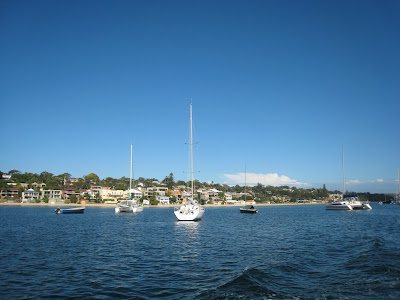 Nearly back in Cronulla.

The return journey was the bus trip to Hyde Park, a pleasant downhill walk to Circular Quay and then a ferry back home.

I enjoyed the day.