Just a perfect day – for flying

After our first real frost this morning, once again the sky was blue and the sun was shining. It was looking like we were in line for a good day.

I got my flying gear together and headed off to Blackbushe where I had booked out a C152 for an hour. I arrived at 10:30 and as expected the airfield was bathed in sunshine and there was no sign of haze or fog. The winds were very light and from the north west. Having checked over the tech. log for G-CDTX I called the tower on the internal telephone to book out. Here I hit a bit of a snag. Apparently there is a limit of 4 aircraft allowed to fly in the circuit at the same time and there were already two other Blackbushe Aviation aircraft doing this, whilst the other two slots are allocated to Cabair (the other flying school at this field). I rang Cabair and asked if they were going to be using both slots. They kindly let me take one of their slots and so I rang the tower again and got permission to fly in the circuit.

I checked over the aircraft and although the air was cold, the lack of breeze and presence of sunshine made the process quite enjoyable. It reminded me of what it was like checking over the aircraft at Naples last February. The cool morning air and beautiful sunny skies together with the excitement of the events to come. I put my camera on the passenger seat so that I could take some photos when in flight.
I took off on runway 25 at 11:05 and embarked on a really useful hour of circuits. The flying conditions were great and although it was quite busy I managed to do a lot of circuits. I lost count of the actual number and remember only one absolutely perfect landing. On one occasion, a visiting aircraft was landing ahead of me. He made a very late and steep approach and having touched down a long way down the runway (it is over 5000ft long) he turned the wrong way off the runway and was told to hold. I was now on late final and was asked by the tower to go-around. I did this but cannot really remember if I carried out exactly the correct procedure in terms of when to take out flap.
Another thing I noticed was that as I was by myself in the aircraft, I climbed away at a faster rate than the aircraft ahead of me in the circuit, so I had to keep a good lookout as to its location compared with mine.
The visibility was perfect and flying was most enjoyable but my hour was soon over as I called for a full stop landing. I landed at 12:00 precisely. As I taxied back I realised that I had not taken a single photo. I guess the workload is quite high when the circuit is at maximum capacity.

Here is a picture that I took once I got home. 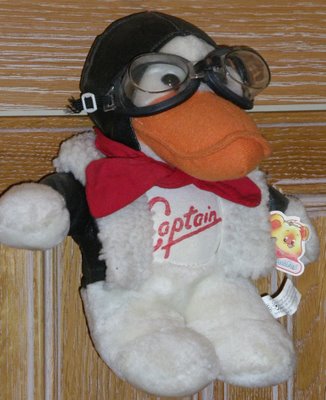 What other good things happened today ?
Well, I sold some shares (whilst flying) and these made a 300 pound profit that helped outweigh yesterday’s disaster when some shares fell to their stop loss point.
Plus it is one of my daughters’ birthday. As she lives in Sydney Australia her birthday was in fact already over as they are 11 hours ahead of us. I am looking forward to my 3 week visit to Oz next February. I might even get in some flying over the Sydney area.