If you want to read about my flight training in Florida then look at the February archives.

This morning I wanted to buy a strap button for my acoustic guitar so I decided to go to Anderton’s in Guildford as this is the nearest musical instrument stockist. It was a gloomy sky but at least it was not too cold. Once I got to Anderton’s I parked and walked into their showrooms. They must have several hundred guitars of all types. I spent half an hour just looking at them. There was one electric guitar that I liked the look of but there was no price on it as it had just come in. I asked the price, but it was £2,200. I did look very nice. There was a replica of a Fender that had been given the distressed look. This tatty looking guitar was over £9000. After my tour around the guitars, I bought my strap button for the princely sum of £1.49 and left.
Mrs Peewit wanted me to get a paper from Smiths, so I walked into town. It happened to be market day in the high street so I took a few photos. 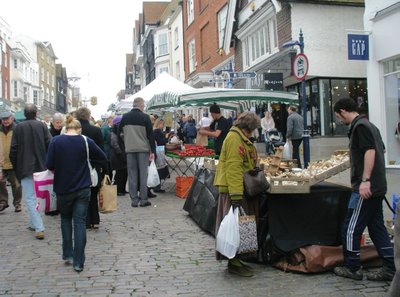 Garlic for sale (to see a bigger version of a picture, just click on it) 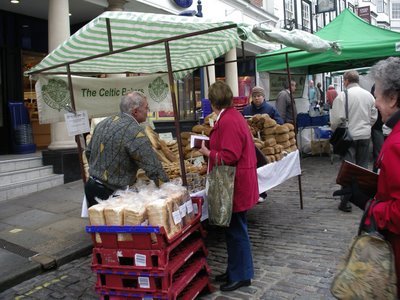 or how about some fresh bread 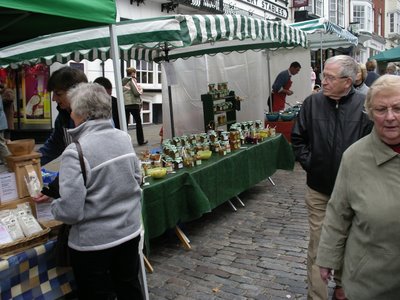 jams and preserves for your bread 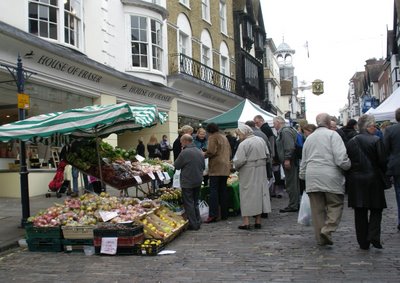 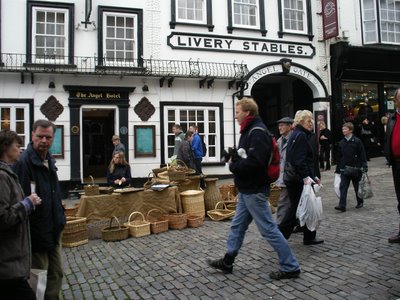 wicker baskets in front of the Angel Hotel

I was tempted by one of the stalls selling pastries. I managed to avoid the urge to buy a cornish pastie and instead purchased a single cheese straw. It doesn’t sound much but it was big at about 12 inches long (I know I should be saying 305mm all because of that little bast**d Napoleon) and although I was going to take a photo of it, I eat it whilst walking back to my car.

On arriving home I found that my share trading system had sold two more lots of shares so I have nearly recouped the £700 loss I made last Thursday. My plan is to make £100 a day, but I have a way to go to achieve that yet. If I ignore my losses I would be on target. Hopefully as I gain more experience, I will cut down on loss making situations.

Anyway, I had better get back to practising my chords.

I use Barclays Stockbrokers, but if you want to get the feel of things try www.digitallook.com and look at their Live terminal feature. This free and gives live streamed on-screen pricing. I use this but do the actual trades on the Barclays system.