Circumnavigation of the world ?

Hi all, my post is off topic, so is not related to GA this time.

Autumn is approaching and last week I started my adult education classes. I have enrolled for two classes. One is ‘guitar playing for beginners’ and the tips of my fingers on my left hand are rather sore from trying to press down the steel strings against the frets. The other is a watercolour painting class. I did do a beginners class in watercolour a couple of years ago but have not done any painting since then. I am keen to get going again and would like to develop a loose and fast style. I must admit that I want to be able to complete a painting in a couple of hours and a previous attempt at oil painting showed that using oils tended to mean that paintings took weeks rather than hours.
Here is the picture that I painted on my first lesson last week. I made loads of mistakes but enjoyed the experience and will hopefully have learnt something. 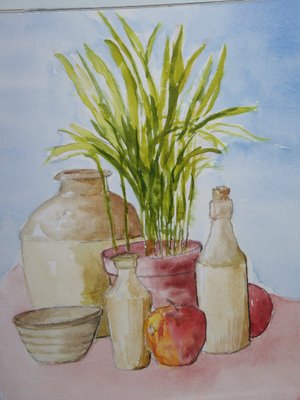 On Friday I visited the Southampton Boat Show with an ex work colleague. Having had a good month for weather so far, it broke on the day of our visit. We were lucky enough to have a look around the pontoons at the hundreds of display boats before the rain started. Once the rain got going though it just got heavier and heavier. Despite the rain we enjoyed our look at the exotic hardware available for those with large bank balances. My friend owns a Broom motor cruiser and so was able to provide expert comment on many of the exhibits. Among the boats we went on-board were a lifeboat and a Nordhavn 40. I really liked the Nordhavn as it was a trawler style motor cruiser. In this boat you could circumnavigate the world in reasonable comfort as it is really rugged with a completely enclosed helmsman cockpit. The engine is de-tuned for reliability and the range on full tanks is 2500 miles so enough to cross all the oceans with fuel stops at convenient islands. The boat was not as expensive as many because it is made in Asia. I quite fancy the idea of cruising around the world in one of these boats. Only problem is that Mrs Peewit gets seasick on a millpond. Here is a picture of a Nordhavn. 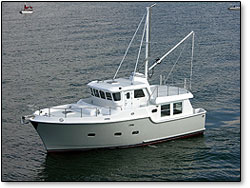 The lifeboat was very interesting and obviously designed for safety and functionality first, but it looked reasonable comfortable for the crew.

I had intended to take loads of photos but somehow the combination of rain and the distraction of the exhibits made me forget about all those photo opportunities. As the rain got worse we headed for the exhibition areas that were under canvas. My friend Leo was researching inflatables and outboard motors as he needs a tender for his boat. We also had a look at some of the gps based navigation software available. Whilst we were under canvas it sounded as if the rain had now become torrential. At 1pm we decided that it was time for lunch and as Leo was a member of the RYA we headed off to the RYA lounge where we enjoyed a cooked meal in congenial surroundings. After lunch we took another tour around the floating display boats. There were some beautiful boats of up to 90 feet in length for the well heeled. We decided to go on board a tall ship called ‘Tenacious’. This is a wooden hulled ship built specifically with disabled sailors in mind. I actually remembered to take a picture of this one. 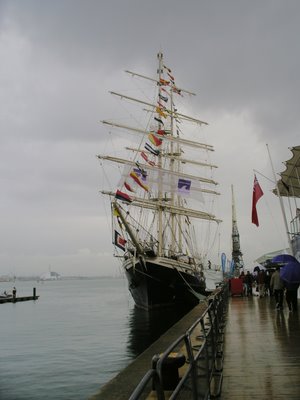 Our guided tour around the Tenacious was very interesting and we heard about how the ship was built from Siberian Larch that was glued together with epoxy. The ship was built mainly by volunteers under expert supervision. The idea was to build a ship that could have a crew that was a mixture of able bodied and disabled members. Up to eight wheelchairs could be accommodated and there was provision for blind and deaf crew members as well. We were told that in the USA, they just do not allow disabled crew members on their sailing boats. It was heart-warming to hear how many of the disabled public can have the opportunity to go on these sailing adventures to the Med. and across the Atlantic.

Time for a coffee. We sat near an area where the show organisers had arranged for hundreds of cubic metres of sand to be laid so that children could make sand castles and be entertained by a steel band. The sand and deckchairs were very soggy by now but some children were finding amusement by playing with the buckets. 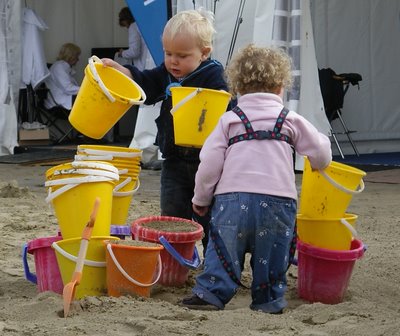 It was getting late in the day and the rain stopped. We wanted one last look at some of the undercover exhibits before going home. We left at just about 5pm and boarded the ‘Park and Ride’ bus that would take us back to the car. Somebody on the bus said that there were problems on the M3 motorway. We hoped that the problems would have cleared by the time we got off the M27 and onto the M3. The jams were still there and our journey home ended up taking three hours instead of the normal one hour. It had been a good day though and it had re-awakened my long suppressed interest in ocean cruising.