I had three flying lessons booked this week. My Monday lesson was cancelled due to low cloud and rain. I was at work Tuesday. I did fly on Wednesday and more on this in a moment. I was due to fly today (Thursday) but ended up weeding in my garden. It was just too windy at Blackbushe today. The wind was at least warm and has moved away from the east and was from the south west. Any wind with some south in it is not great at Blackbushe because it blows over a large area of trees and causes a lot of low level crosswind turbulence.
I am trying to get my flying up to a standard to take the skills test. Despite the two cancelled lessons, yesterday was a very good day. My lesson was booked for 1:30 and I was expecting to practice all the various types of take offs and landings. 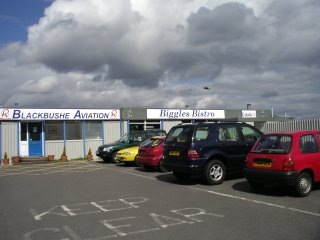 Blackbushe Aviation from the car park.

On arrival at Blackbushe Christian was still flying so I checked out my C152 for today (G-BLRK). 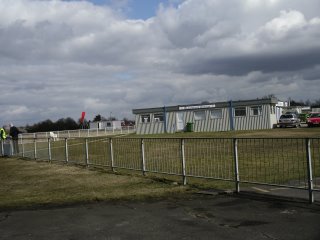 Photo taken from the aircraft apron.
After I had checked the aircraft and Christian was back at the school two things had happened. One was that the wind had moved considerably to the south and the other was that the aircraft that my instructor was due to fly after my lesson had a technical failure. So Christian asked me if I wanted to do a practice skills test and have a double slot. Yes, I did want to do this and so went to retrieve my flight bag from the aircraft so that I could do the navigation planning. I planned the visual navigation from Blackbushe to Buckingham after which there would be a diversion to somewhere ?. The winds aloft figures had changed from their earlier numbers and I used the new figures to calculate a heading and speed. My estimated groundspeed was 116 knots and it would only take 21 minutes to fly from just north of the field to Buckingham on a heading of 349. Soon after 3pm I started up the aircraft and soon we took off on runway 25. I turned to the north and gained altitude. As I levelled out to lookout for other aircraft in the vicinity I could see that although the sky was mainly grey and cloudy, there were a few breaks in the cloud. At my planned altitude of 2300 that was at the minimum safe altitude for the route but below the cloud and London TMA airspace, I set off on my planned heading. It just so happened that the one break in cloud ahead was causing sunshine to fall on a tower in the distance. This was my second visual reference point some 20 miles away. It is the Stokenchurch communications tower alongside the M40. It was almost as if someone up there was picking it out for me to guide me on my way. I could tell that my planned heading was correct and I could concentrate on other matters for a while such as changing to Benson Radar on the radio and carrying out FREDA checks, etc. I flew over the tower and found that my Walmart stopwatch had not been running and was unable to check my timing. This was the not the first time I had had a problem with this stopwatch so I made a mental note to buy a clockwork one that I could fit onto my kneeboard. I would hate to fail a skills test just because a watch was not working. I did not properly identify my next planned checkpoint, but a couple of adjacent lakes a few miles further on showed that I was on track. So, I was soon overhead Buckingham with no problem. As I had approached Buckingham, Christian told me that my diversion was to Goring (on Thames) and he showed me where it was on the chart. I suppose I should have worked out my planned heading before I got to Buckingham but in fact waited until I turned overhead as I knew the approx heading. I stated my planned heading of 200 and ETA for Goring. As I was flying on my heading I could see the two lakes again and convinced myself that I was not on the right track and altered my heading and reported this to Christian. He had to tell me that I was approaching a MATZ (I should have realised this myself) and to request a MATZ penetration. I did this and it was authorised. I was struggling to read the chart with my bifocals in the area that was shaded blue for the MATZ zone and Christian commented that I was spending too much time with my head down looking at the chart and not enough flying the aircraft straight and level. I could tell that the new heading was not working out and so I adjusted it back to my original 200 and Christian commented that he could not see why I had altered it in the first place. Subsequently I could work out where we were and got to Goring without too much difficulty and a only just after my ETA. Then we did some manoeuvres and once again some went well and others not quite so good. I was still making mistakes but Christian said they were not major. Next I needed to find Blackbushe and within a couple of minutes I had worked out where it was. I made another mistake on the joining and Christian had to prompt me to sort it out. We did a few touch and go’s but the crosswind was quite difficult and on one approach for a flapless landing, there was some windshear and the aircraft just dropped fifty feet and we both came out of our seats and Christian reported to the tower that his head had come into contact with the cockpit roof. The last landing was a glide approach and I landed it a bit hard and at an angle. I was mentally fatigued and we called it a day. Back at the apron Christian went through the good and bad. I had made big improvements in the areas where I had difficulty on the last flight but this was offset by some new mistakes such as failing to recognise that I was soon to make my first ever MATZ penetration. So I have a list of things to sort out and the plan was to return to Blackbushe on Thursday to get into the circuit and fine turn the take offs and landings. 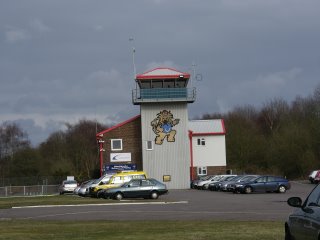 I took a photo of the Blackbushe tower just before driving home.

As mentioned above, I ended up weeding today instead of flying. Tomorrow I have to drive to Boston in Lincs and back. That is 6 hours of driving. I can’t help but think that it would still be much quicker to go in a slow old C152.

Next lesson is booked for Monday 3rd April.

Which weeds were the most numerous? And what does that demonstrate about the illusory nature of human perception?

The ones with the small leaves and white flowers. If you let them turn to seed and touch them, they explode the seeds over a 3 foot radius. Are these weeds an illusion ? and does weeding spread them or reduce them ?