Up early and another of those pleasant cycling at sunrise journeys via Brookside Drive and Estey Avenue. These surburban roads are quiet and the only obstacles on the path are the occasional wheelie bin that has been put right in the way. The school buses are always active at this time of day so I guess the schools start early over here. I arrive at NAC by 7am and go and check the weather so that I can complete my planning for my route from Sebastion KX26 to Indiantown KX58 to River Ranch K2RR. For the last few days the skills tests have been conducted from Sebastion as the resident examiner has been missing. As he was not available, alternatives were put in place to fill the gap. The only affect as far as I was concerned was the rather long trip of 120 nm to get to the start airfield. One of the instructors named Brett (a very pleasant American) was to fly me over there and back. I got the winds aloft and they were 210/05 and I completed my planning. I knew these winds aloft figures could change and so I intended to check them again at Sebastion. I also did a weight and balance form for N946AC. Once all the paperwork had been checked over, I did the pre-flight check on the aircraft. 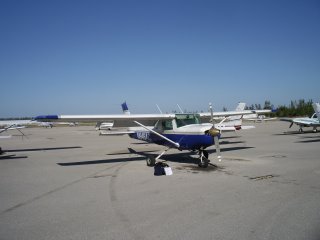 A nice day for flying.
Soon after 9am we took off for Sebastion and I took some photos along the way. 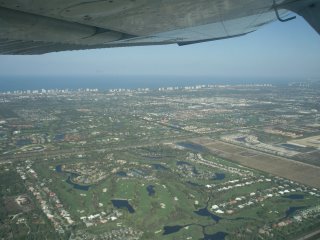 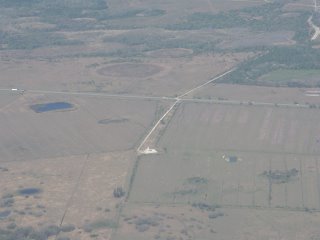 The La Belle VOR. Brett used VOR’s as his prime means of navigating and we both used visual reference points to check our progress. 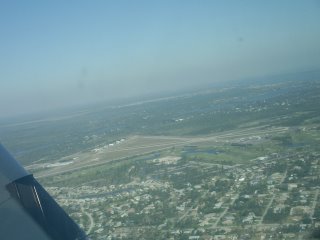 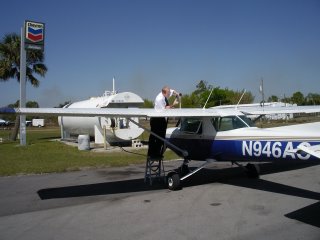 Brett refuelling the aircraft at Sebastion.
I met the examiner Ray Williams and he checked over my paperwork, medical and ID. He then went through the procedure that he would use on the test. He gave me his weight and I had to re-do the weight and balance paperwork. We were only just within the allowable envelope. A few more pounds and we would have been taking fuel back out. Luckily I must have lost 7 pounds in weight after 3 weeks of cycling. It was now midday and we were to meet at the aircraft at 12:30. I just had time to have a bite to eat and drink and mull over what he had told me. I thought I had better go and pre-flight check the aircraft. Just as I finished this, Ray arrived. Damn I didn’t recheck the winds. Ray strapped in and the C152 cockpit was well and truly filled. He was double the weight of my instructor so I do not know how this will affect aircraft performance. I do the internal checks and passenger brief and soon we take off on runway 26. Climb performance is poor and I need to contact the Vero Beach tower whilst still climbing to 3500ft on my planned 177 heading. The route skirts the Vero Beach airspace and they do not ask me to alter my route. I find it difficult to spot my visual check points and it soon becomes clear that the winds are not as planned and I am drifting significantly port of the intended track. I decide to alter my heading from 177 to 190 and report this to Ray and provide a new ETA as requested. Even with this corrected heading I was struggling to pick exactly where I was. I felt that I was close to Indiantown and called on the unicom frequency and started descending. Indiantown is a grass strip and there was no radio activity. I was still left of track and as soon as I saw a canal I knew to fly no further and turn to the west. I soon spotted Indiantown and continued my descent. I had made two mistakes by now. One was not making a sufficient course correction and secondly I assumed that I need to descend to the circuit height of 1000ft. In fact Ray said that as I had said that the next leg was to be at 2500ft, I should have not gone lower than that. I do not think that he was too happy about the fact that there are some tall masts (1549ft) left of track and of course I was left of track and descending. My next leg started at the nearby power station overhead the stack. He advised me to stay south of the stack to avoid the turbulence it produces. I picked up on my course and the visual references were easier to spot and so this leg was going well. As per normal we started on the manoeuvres. My rate 1 turn was good. I struggled with the steep turns and in the left direction had to try really hard to get the required 45 degree bank. In the process of trying to achieve that angle I lost some height and I knew that was bad. My right steep turn was only a bit better. I cannot remember exactly what we did next but the slow flight was bad as I had been practising it at 55 kts and Ray wanted 75 kts and it took too long to get stabilised. We did a practice forced landing and it went really well and the following simulated engine failure on takeoff also went well. The way in which we commenced the stalls threw me. He asked me to fly at Vs0 +10 and I completely forgot the HASELL checks. Ray was exhibiting a fidgety body language and I could tell it was going pear shaped. A little while later the test was terminated. I was feeling really disheartened and then somehow just weary. I flew the aircraft back to Sebastion. Ray went through my mistakes. It was nobody’s fault but mine, and Nikki always said that I rationalise things, so here it comes. Maybe I was not quite ready for the test and perhaps my stamina after 3.5 weeks of intense learning activity is not what it is for the youngsters. In hindsight, I could have done with 4 weeks here but like others we all have family and work commitments back home. I knew quite a few students that had not allowed long enough for the training and left without even taking the skills test. At least I got a chance at it and I will learn from the experience.
After the de-brief I met up with a sympathetic Brett who had refuelled the aircraft again. I paid for the fuel and we set off back to Naples. The wind was definitely a headwind on the way back and the journey took 2 hours. The visual navigation was difficult as we were flying into the sun and there was a lot of haze. Even though Brett was flying I found the trip difficult. At that moment I felt that this flying was all too complicated for me. Back at Naples I had a sympathetic reception from those still there as it was getting late in the day. I went through the test in detail with Nikki and she did her best to cheer me up. After sorting out the paperwork I left for the hotel knowing that I would be back in the morning to return my bike and say my goodbyes.
At the hotel I had a shower and got changed as I was meeting up with Dale (known to some as DownIn3Greens), his wife Ilsa (originally from Latvia) and Eugene (a fellow student, also from Latvia). At Dale’s house, I met a friend of his called Rob and he had a Harley Davidson. 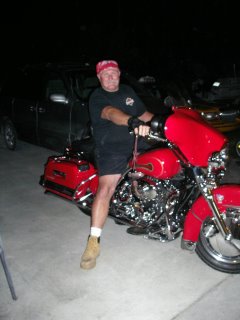 Rob is a fireman for Miami-Dade county and the Harley is a special 911 edition only made available to firemen.
We drank quite a lot of beer whilst waiting for a lost taxi driver to arrive with Eugene. Then we sat by the pool and all had more beer, nibbles, etc whilst talking over many subjects such as air passenger transport, Florida, Latvia, shared acquaintances, etc. It was very relaxing and enjoyable after a disappointing day for me. Dale offered me some wine and then came up with an enormous glass of a soft fruity Merlot. I did not drink all of it. Later a taxi was organised to take Eugene and myself back to our homes in Naples. It had been a good evening but I was aware that I was not in the best state to be flying home the next day.

I slept well though.

Come back and read my next post if you want to hear about my pleasure flight in a C172, an unexpected encounter with a python, the Tamiamia trail, the smallest government building in the USA and my flight home.

Just a thought but why did you not do your skills test at NAC with Andy ?. I thought he was CAA approved ?.

Andrew was missing for a few days and I think he may have left NAC. I do not know the why's and wherefore's, all I do know is that the gap was filled from another source.