Great day for England.
I did not have a ticket for today so watched the Channel Nine coverage which was the worst coverage of cricket that I have ever seen on tv. Even with a Tivo it is hard work. There are adverts between every over, continuous replays between balls and commentators whinging about the Decision Review System which England only used once. The Tivo over here in Australia has been knobbled by commercial interests so the only way you can skip adverts is to pause live tv, wait a while and then fast forward through them. There are no skip buttons. During the over there are constant replays between balls, these replays are not identified as such on screen and maybe from other games, other series or even from other years. It is extremely hard to work out what is live and what is a replay. They even have advertising between balls with some sort of best catch competition with a commercial sponser, so you get a live ball, followed by three videos of catches from earlier in the series followed by a live ball, followed by another advertising catch. I tried turning off the sound but just could not work out what was going on. Eventually I found that I could listen to radio commentary on ABC radio and mute the awful Channel Nine audio.
I was pleased that I did when soon after Nine decided to completely ignore the cricket and show a long live interview with Julia Gillard (Australia's Prime Minister). Luckily I could look away and just listen to radio coverage of the match. This is just as well because Miss Gillard speaks verrry slowwwly with very simple grammar for the meanest of understanding. She also moves her hands and arms around as if there is someone above operating them with strings. You have to wonder who told her that it was a good idea to do this ?
Anyway I peeked at the screen every now and again and eventually she was gone. I had been happily listening to Aggers commentary on the radio when blow me, Julia Gillard was suddenly on the radio as well. Is there no respect for anything here.
More fiddling with audio feeds was required to avoid her droning. Back to Nine coverage. The good news was that Cook and Bell (and later Prior) were putting on an excellent batting performance and building up a lead of over 200 by the end of the day. I just took a couple of photos of the tv screen at the end of play. 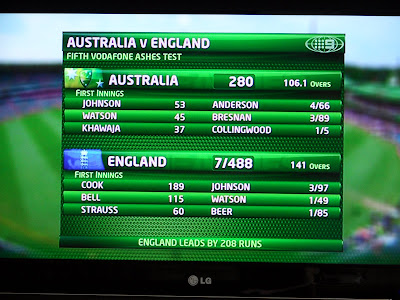 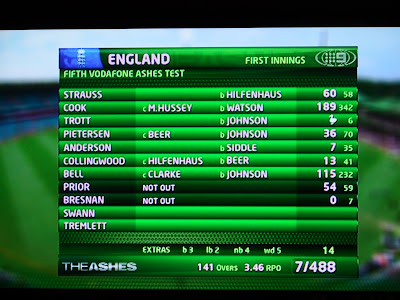 On Thursday I will also be watching the day 4 coverage on tv and have devised a strategy for trying to avoid the worst of the advertising which does involve just gazing out of the window across the beautiful Sydney harbour on occasions. I'm sure it will be a good day but you cannot just grab a beer, sit back and enjoy. It takes Cook style concentration to make the technology defeat the commercial interests.
Peewit