The Bondi to Coogee walk

Want to know about a really pleasant walk near Sydney ?

We are getting some great weather here in Sydney at the moment. It is Autumn so the temperatures are a bit lower at the moment with 17C at night and 26C during the day. This is combined with cloudless skies and a slight cooling breeze. It was set to be another of those blue sky days today so having spent some time shopping in North Sydney during the morning, I decided to go for a walk. Having taken the 7 minute ferry ride from McMahons Point to Circular Quay I caught a 333 bus from a nearby bus stand. The bus was air conditioned and about forty minutes later Bondi Beach hove into view. I crossed the road from the bus stop and sat on the grassy park area to have my snack lunch while looking across the beach. If there is a group of you there are dozens of cafes where you can have a delicious al fresco meal, but being on my own, homemade salmon sandwiches suited me. 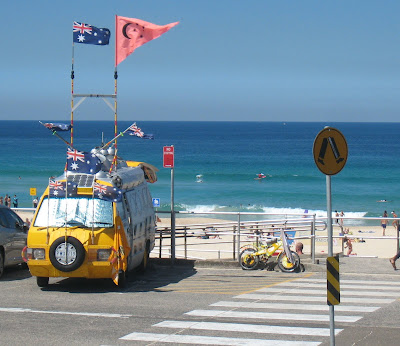 Some surfers have odd forms of holiday transport. 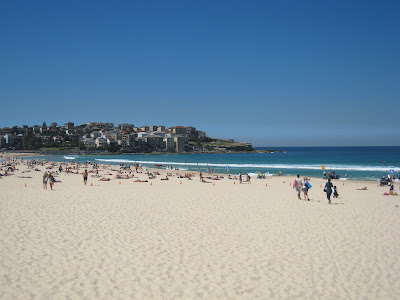 The beach looks very inviting but I am here for a walk. So setting off in a southerly direction you just follow the beach promenade. It looked like there was filming going on for the Bondi Rescue series however this was a day for sunbathers rather than surfing as the breakers were quite small.
At the end of the beach the path joins the road for a few hundred yards during which you pass Bondi Icebergs that is a sort of club. The last time I did this walk Paris Hilton was visiting the club and as a result it was surrounded by burly security staff. No such problem this time, just valets parking various models of Bentleys. Near the club there is a good view looking back across the beach. 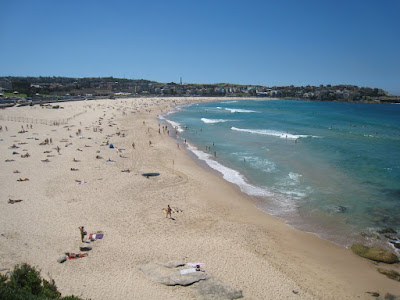 You have to look out for the path turning off the road and down some steps towards the ocean then follow the path along the coast by all the spectacular rock formations and eroded cliff. The path is very well made and quite safe for all ages. From this path I could see a passenger cruise liner approaching Port Jackson. I zoomed in to the maximum ability of my little pocket sized camera and took this photo. 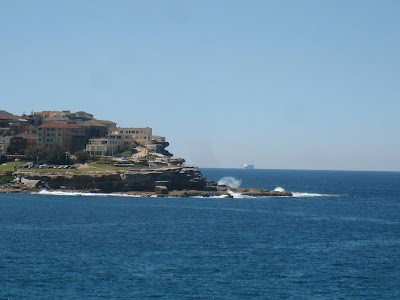 A little further on there were some young men taking the risk of jumping off the cliffs and into the sea. As I wanted to keep both my legs in full working order I was just sticking to the path. 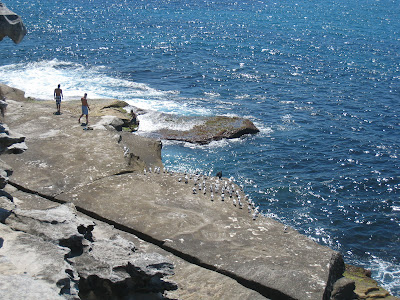 The path curves around the coastline. 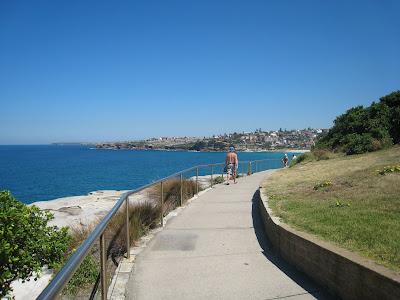 Soon some of the southerly beaches come into sight. 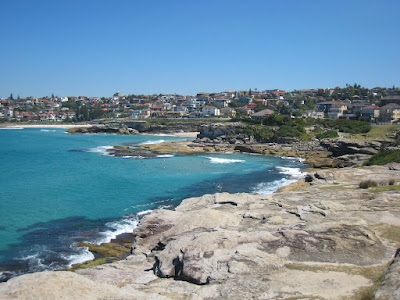 It is not long before you arrive at Tamarama Beach 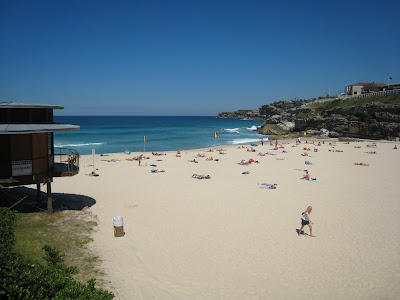 Just follow the path around the beach and the up some steps to the road. The road takes you around the headland where the path starts again. There seem to be some good spots for fishing or scuba diving here. 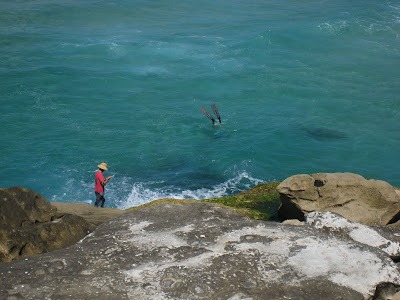 Just a little further and you get your first view of Bronte Beach. 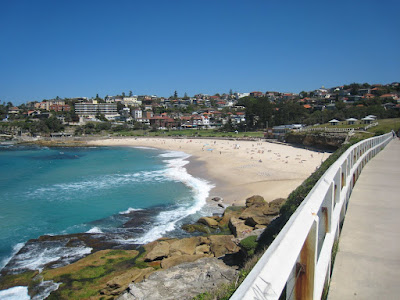 As I walked by the sandy beach it did look very inviting. 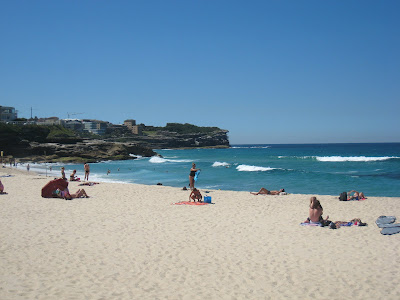 Having walked by the beach you again need to climb some steps and follow the road. This road can be busy at weekends but it was quiet for me. The road goes uphill and through a narrow cutting in the rocks but once at the top you can swing left and back onto a footpath. The last time I did this walk the path took you through a large cemetery that sprawls over the cliff, however there is now a nice new boardwalk that bypasses the cemetery and provides great ocean views. This photo looks back along the boardwalk with Bondi in the distance. 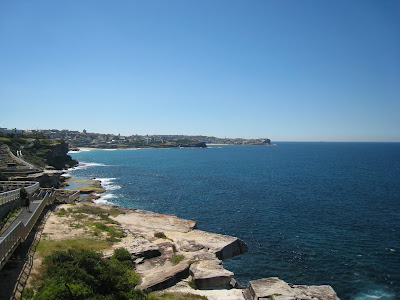 Next you pass the Clovelly Bowling Club 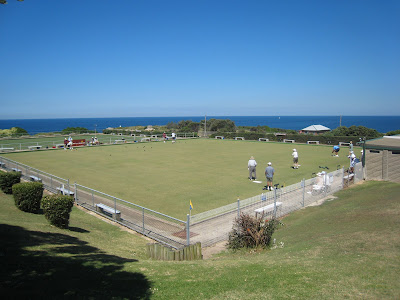 Fancy a roll up here ?
Follow the path along to Clovelly Beach where there seems to have been a concrete tsunami making this one of the less pretty beaches on this coastline. 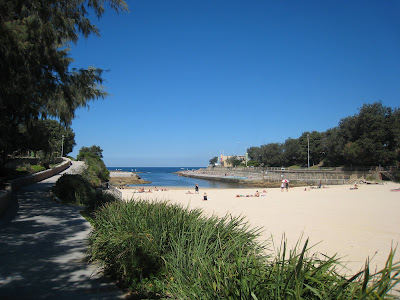 Having walked on the path around Clovelly Beach and if you fancy a break there is a very nice café/ restaurant just on the right. Then cross the public car park and at the far end by the coastline the path resumes. You soon approach Gordon’s Bay 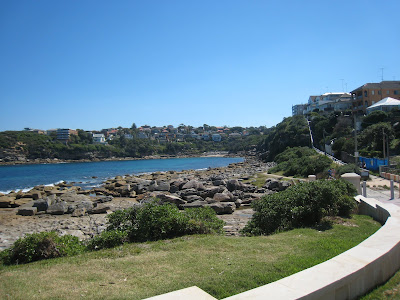 Here there is a bit of a sting in the tail with this walk as there is a bit of climbing and descending. Gordon’s Bay has lovely clear water and is a favourite spot for scuba diving with some sort of underwater treasure trail. I took this photo of some tinnies by the small sandy beach at the head of the bay. 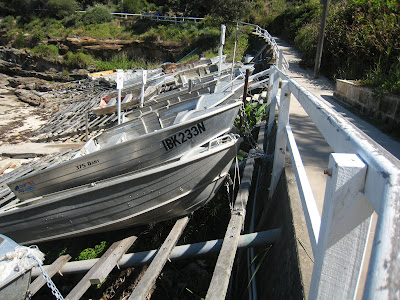 You are then heading uphill again but at the top the path takes you through nice green parkland. The path is a gentle slope down towards Coogee. Along the way there is a memorial sculpture to commemorate the Bali bombing.
Lastly you arrive at Coogee Beach. 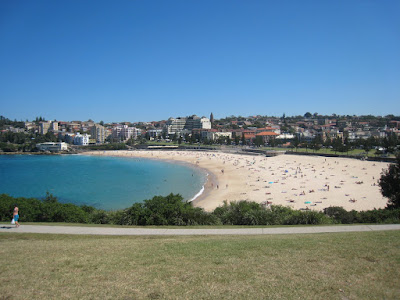 Here you have completed the walk and can relax on the beach or visit a café and maybe have a Danish pastry without feeling guilty having walked off a few calories while having an enjoyable and rewarding walk.
I caught a 374 bus back to Circular Quay.
The walk took me about an hour and a half at a leisurely pace with a few stops along the way.